This article came out today in 'lectronic Latitude requesting that more sailors need to visit Aquatic Park so the NPS can justify providing amenities. I have always steered away because of the "no motor" signage, but have been told (and it's reiterated below) that this does not apply to sailboats. We had such a fun time on our first two meet-ups that we need to start planning our Third Annual Bay Area Freedom Rendez-Vous; perhaps in March or April when the weather ought to be really nice and the winds are just starting to pick up. We could tour the vessels in the museum there in Aquatic Park and do some touristy things at Fisherman's Wharf or Fort Mason. How about we pencil in a weekend now? Please offer some dates. March 7-10 is the Ocean Film Festival at Fort Mason, which is really cool, if you've never done it (http://intloceanfilmfest.org/). I don't tend to schedule out more than a month in advance so everything is wide open in March and April at the moment except for April 13, which is one of the SSS races.

On December 29, sailboats lit up the historic Aquatic Park anchorage with colorful holiday lights for the “Lighted Night in the Cove” to support The San Francisco Maritime National Park Association. It was a beautiful evening with perfect Bay weather conditions as the colored lights sparkled against the spectacular lighted backdrop of Ghirardelli Square and San Francisco. There were five sailboats in attendance — not as many as we hoped for, but considering the time of year, it was a good turnout. Everyone had a great time as Karen and Tim Crowe hosted the evening’s potluck aboard their Catalina 44.5 Crow’s Nest.

The idea behind holding the event was to reintroduce the Aquatic Park anchorage to the boating community in a fun and festive way. Surprisingly, many sailors aren’t aware that they can motor their sailboats into the park and anchor there. According to David Pelfrey, Aquatic Park harbormaster, the cove has the anchoring capacity of 4,380 sailboats per year, yet fewer than 300 boats anchored there last year. Part of the reason for this is misleading signage at the entrance saying “No motorboats” when they are referring to “powerboats.” Sailboats with auxiliary engines and/or dinghies with small outboards are allowed. Another common belief is that only small sailboats are allowed in, when in reality, sailboats are not limited in size. The park requests that any craft over 40-ft in length and/or with a draft of 8-ft or more contact the harbormaster for best anchoring instructions.

In San Francisco Bay, the number of anchorages is limited and needs to be preserved. The Aquatic Park anchorage in particular — with its incredible location — is quite a jewel. According to Pelfrey, the National Park Service wants the boating community to take advantage of what the park has to offer and wants to expand services for the boaters, including a dinghy dock/showers/restrooms. But, they can’t justify such an investment with such low boater attendance and zero boater input. Boaters are an important element of the customer base and part of what Aquatic Park was designed for. However, there are many different constituencies using the park, so without boater input, only non-boaters are making decisions about the direction of Aquatic Park.

According to Pelfrey, “In order for change to occur, we need the boaters.”
Kynntana, Freedom 38
Top

Aquatic Park is a gem. Been in there multiple times. Free! Sailboats should drop sails and motor in ( there used to be a restriction of no boats over 42’ but I know the Chris White designed catamaran LightSpeed - 42’ - anchored in there for 2 weeks- so don’t know about that now). Anchoring is free - just need to call VHF or phone and give boat name, length, hailing port and duration. Be very careful of swimmers - at all times of year there will be swimmers there - and at practically all hours too - no exaggeration--The problem there only being the shore! There is no dink tie up proper. we can figure out how to tie up our dinks on the open beach (which has no security).

Edit - sea lions can be a nuisance IE dinks on beach....

Right, there are no amenities.

You both have mapped out some of the issues, but we're interested.

BillSmith wrote:You both have mapped out some of the issues, but we're interested.

Thought about anchoring for New Year's Eve and watch midnight fireworks. Carole said, "Too far, too cold." She wasn't wrong based on what we saw on TV that night.

My son was visiting from DC and had brought his new camera with large lens and tripod. We set up at Treasure Island with the masses on land around 9:30 and waited. The people next to us had gotten there at 6 PM. Yes, it was freezing cold and windy, but the show was nice (tho only 15 minutes long) and he got some amazing pics. It took us 1.5 hours to get back on the Bay Bridge

With Tony as our most recent Bay Area Freedom owner (F40/40), we need to get a committed date on the calendar to do a raftup at Aquatic Park. The April weekends include an SSS race, the Pacific Sailboat Show and Easter, so I'm leaning toward the last weekend in March (30-31), which just coincidentally happens to be my birthday

How about it? Setting a firm date on the calendar will also get me committed to patching my dinghy right this time. Who's in? I could notify Aquatic Park that we plan to be there. Would love to get another great showing of Freedoms. If too many people can't come for March or we get another storm rolling in that weekend and have to cancel, we could also try another weekend in May.
Kynntana, Freedom 38
Top


Added 3-1-19
Went to Aquatic Park yesterday - as seen, I'm in 16' depth - better at 10-14 I believe. I was the only "non Hyde Street Pier" boat there. Lunch only. There was one swimmer towing a bright orange float right at the entrance. I was there right at a huge flood- later when I left and headed for the gate, Good Way was completely turned 180 degrees by the current - good I thought, I like sailing east anyway (I felt like I was in a Maurice Griffiths novel). Also saw a bulk carrier run aground at west end of Treasure - with the big flood he got off around 3:00pm. 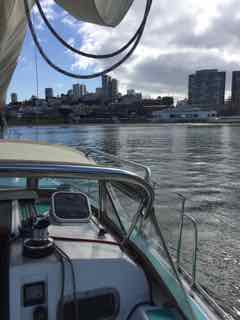 Our schedules are currently free. Add one Freedom.

Hey everyone! We're just two weeks away from our SF Bay Rendezvous. Looks like 4 boats so far. Just curious to hear if the Aquatic Park venue is scaring off some folks. Is everyone still committed to there? Would anyone else be coming if we were to move it, perhaps to Angel Island instead? We'd still need dinghies because there's no overnight dockage. What are your thoughts?

BTW, I heard the Freedom 30 at Farallone Yachts was sold to a pilot in the South Bay with not much sailing experience, but seems excited to learn. I passed on the link about our Rendezvous plans via his broker and I am hoping he will join the forum.
Kynntana, Freedom 38
Top

Enjoyed a day on the bay Saturday until...

A squealing that I cannot reproduce. Only made noise when transmission engaged, so assume it to be from there back. Nothing I can readily access has a lube fitting. Will take the boat out again this weekend to ascertain what's up.

Sail it until it breaks not appealing when it could be a shaft bearing.

Return to “Events and Announcements”