Oh, Mike, so sorry to hear about engine trouble. I hope to see you at Vallejo 1-2. We had a great time with a great group of people. I loved seeing everyone's boat. Tom (GoodWay) hooked us up nicely with the wine tasting event. The yacht club folks did a super job with burgers and stayed open late just for us. After Bill and Carol were chased off at midnight, that ornery neighbor proceeded to blow some kind of fog horn around 1 AM. I stared at my anchor alarm for another hour, but barely swung more than 30' from my spot. In the morning, he did float almost on top of Kynntana, nearly as close to the party boats as I was, and was quite adamant about the "moorage rules" that gave him certain rights. Apparently, he had let out some 7:1 scope of all rope rode in 18' of water giving him probably 300' of swing radius. He did eventually pull some in and was sitting perfectly at his anchor in no time and no more fuss. We then enjoyed a nice breakfast that included Natie's incredible, fresh-baked scones. Camilia and I raised the sails, but ended up motoring back because of the 2-knot ebb and very little wind south of the Bay Bridge. Camilla also got some docking practice, which she nailed perfectly (I dock stern in). All in all, it was such a beautiful weekend -- thanks to you all!!

Only two pics I have - the shot in boat is missing Tom, Steph, Tom

The wine pic is hiding Carol of SweetTart

It was a blast comparing systems on our boats and doing tours on them - due to the grumpy poor anchorer (aptly and accurately described by Carliane) next to SweetTart we didn't really see Bill and Carols - next time! Doug has an electric motor! How cool is that! 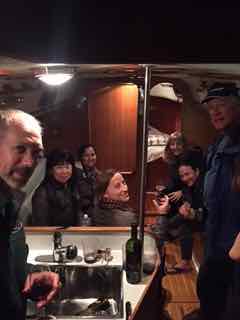 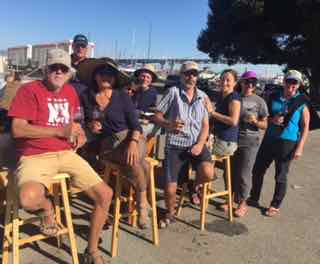 Marie, Frankie and I all had a great time. We were fully charged and under way at 0530, we motored for an hour and a half and then caught the Easterly and the current that blew and pushed us all the way into Vallejo. The Millennium Falcon logged 8.4kts for a top speed and averaged 4.0kts over all getting back North. We had 6-8 waves in San Pablo bay and had to beat our way to Mare Island, I had 75% left on the battery upon arrival. Lets do this again!!
Doug and Marie
Millennnium Falcon F33 CK cb #4
1980 wish bone booms Electric Drive
Top

Don't know if this is appropriate here - but if anyone is interested in "saving" Clipper Cove at Treasure Island from the mega developers, I've included a link here-

Boy, that big marina would be a terrible shame. It would probably lead to some dredging which would be good but there would be way more traffic in the cove which would inevitably lead to greater restrictions on the anchorage. The traffic would also disturb its tranquility. I support progress at TI but a massive expansion like this is way overboard.
Mike Cunningham
Freedom 30 (Mull) Hull #3
Build date...June, 1986 . Freedom Yachts USA, sloop, shoal keel
Gun Mount and pole retrofitted (purchased from a Hoyt Freedom 32)
Yanmar 2gm20F , 1600 hrs fixed two blade prop
e-rud and ocean racing equipment
Top


Vanguard 15s slog through Clipper Cove on a Thursday night race in June.

The current proposal includes a 313-slip marina — up from today's 110 slips — that utilizes 882 lineal feet of Clipper Cove and includes five docks. The new marina would include 40-, 50-, 60-, 70- and 80-plus-ft slips, with an average length of 53 feet. Construction would take place in three phases, beginning in early 2019, starting at the easterly end and moving to the west to avoid displacing existing marina users. Original marina plans dating back to 1998-2000 featured a 400-slip marina utilizing 2,013 feet of Clipper Cove. The proposed footprint of the marina has been adjusted over time.

Last year TISC reached a reluctant compromise agreement with TIE, but TISC’s leadership remains concerned about the impact the expansion will have on recreational use of the cove. In a statement in April 2017, Carisa Harris-Adamson, chair of the Treasure Island Sailing Center Foundation Board of Directors, said the compromise agreement would still have a negative impact on not only high school and collegiate sailing, but also adult racing and cruising sailors. "The public value of Clipper Cove is the free open water protected by the Cove which is about 3,797,430 square feet. The footprint of the proposed compromise marina layout would consume about 1,195,275 square feet, an area equivalent to 32% of Clipper Cove, not 15% as stated by TIE’s representative during the (November 2016) Department of Boating and Waterways meeting."

A number of community groups have opposed the scale of the marina expansion, including Baykeeper, Save Clipper Cove and the Sierra Club.

below ARE 2 pics (Taken by Tom Marlow on Catch 22!) on Bay Bridge in background - I wanted the pics in here to show the beauty of the Treasure Island ! And..... can we have another raft up .... at TI, or China Camp, or Pillar Point, or Drakes Bay?????? We could pick a good weather window for anything outside... 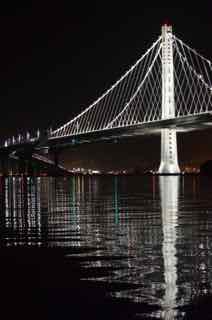 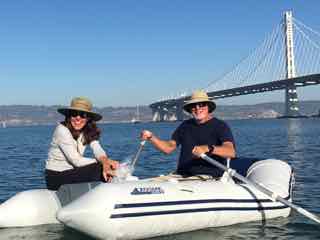 Definitely up for another adventure. Carole not buying a tour under the GG Bridge, but the whole bay is OK. Not this weekend, as birthday girl is heading to Chico celebrating with daughter.

SweeTART is out of commission. Can't find an oil leak that mysteriously has yet to reappear after two 30 minute stints in the slip. Did find the injectors were misting, so they are being redone and will slap it all together to see if the oil leak can be found. Very odd. Never had even a drop previously. Didn't look to evaluate until the next day, well...actually same day since we got back at 4am. Nice puddle of black stuff in engine bilge. No trace of where it found its way out.

Investigating best method to repair/replace the windlass motor. Boat is taking lower place on the 'to-do' list. End of tennis season has me busy.

Have some photos I'll post when I can reduce to acceptable forum size. 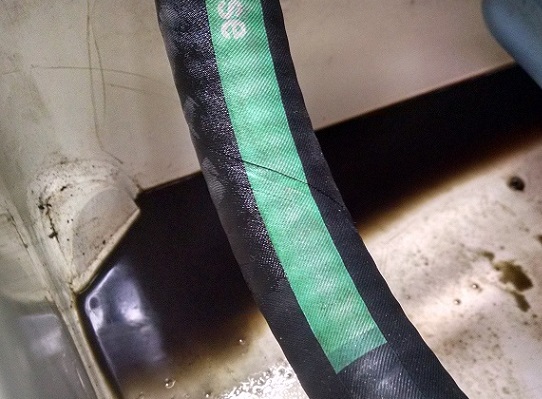 Oh no! Not more engine trouble for the fleet. This reminds me I need to do some engine maintenance soon. There's talk with Camelia and I about taking our boats to Angel Island the 2nd or 3rd weekend in November. Let me know if you all are interested. This is a med-moor tie up, which I've never done but should keep all boats from swinging at different radii