I was reading my old posts about getting ready for the Transpac and am feeling guilty about not following up with some information about what I did to get ready for the race. Some of my upgrades were useless, or worse, but a few worked out pretty well. So I thought I would start relating my findings. Some folks were after me to do this a long tome ago so apologies for the lateness of this report. I did a lot of stuff so I am going to use this thread to try to cover it all over a number of posts. Here goes the first item.

I tried hard to imagine what would happen if the boat wound up upside down during the race. I started imagining and then didn't want to think about it any more. It was going to be a disaster!! However, there were a few things I could do to mitigate the chaos.

Note, Amazon was an absolute goldmine of prep material. I have linked to various parts - buy them wherever but Amazon provides photos and such so that is why I am using their link.

These were fantastic!! For the race I removed all cushions from fore and aft cabins. I installed (through bolted to boards) 8 of these tie downs in the forward cabin and eight more in the aft cabin. I used ratchet straps to actually secure things to the boards using the tie downs. The emergency rudder blade, drogue, anchor and anchor rode, empty fuel jugs (way out) storm sails etc etc. Worked extremely well. The beauty of this particular tie down is it lies flat when not in use so I'll be able to re-install the cushions right over these tie downs which are low enough profile you won't even know they are there. By the way, you might think ratchet straps would be a corrosion disaster but I was extremely surprised and pleased with their performance over 5000 miles of passage. I did not dunk them in salt water but they certainly were exposed to a lot of wet and continued to function throughout the trip.

I used these to tie bundles together and to secure the port settee seat boards which cover the storage locker under the seat. They did not serve as well as the tight cinching ratchet strap but were extremely useful for bundling things together for subsequent ratchet strap tie down and had the flatness I needed to work under the settee cushion.
I really struggled with how to tie down those the plywood lids on the settee bottom storage. On my boat that just lay on top of the seat frame and will pop right off of the boat were to experience a knockdown, especially with some of the heavy spares I have stored down there. So I cut a small hole in the boards at the forward and aft ends of the settee. I cut the cam lock strap in half and bolted one end to the bulkhead below the aftermost board, same on the forward most board. Then ran the cam end across the top of the boards to mate with the strap end. (hope this makes sense). I then cinch up the straps a voila, the boards are locked down. It is not perfect but easily tight enough to prevent anything from getting past the boards.

The lids I did not secure are the aft cabin under berth storage which was held down by the emergency rudder security, the chart table lid which I could secure temporarily with a hooked ratchet strap and the forward cabin basement hatch which was secured by empty fuel container lash downs on top of it. I did not secure the icebox lid but after day six there wasn't much in the icebox anyway.

Out in the cockpit I locked down the lazarette lid with small SS spring carabiner. I used a board and wedges to secure the propane tanks and locked the lid down with a bungee strap secured to a hook on the Yanmar control panel.

I am happy to say I never came close to being upside down but I did get a bad knockdown to about 80 degrees or so. Far enough to scare the crap out of me. I had not secured my weather laptop and it went flying across the cabin. To Asus great credit, the only damage was the bezel which popped off and was easily re-attached.
Mike Cunningham
Freedom 30 (Mull) Hull #3
Build date...June, 1986 . Freedom Yachts USA, sloop, shoal keel
Gun Mount and pole retrofitted (purchased from a Hoyt Freedom 32)
Yanmar 2gm20F , 1600 hrs fixed two blade prop
e-rud and ocean racing equipment
Top

No matter how many things you secure, there is always something that will come adrift in a knockdown. I have read accounts of other solo sailors who took a knockdown and fared much worse. Sounds like you did a great job. I am unclear how the camlock straps worked. Would velcro straps or bungee straps also work?
Top

I think velcro would have worked fine. I used a cam strap because I had purchased a batch of them for various strap down duties aboard the boat. I am not so sure about a bungee, at least in the way I implemented. I think there would be to much stretch. I will take some pictures and post them so it's a bit clearer how this worked.

Also, I am sure there are more ingenious ways to deal with the settee boards. I just could not come up with any that were simple and cheap.

You are right about a knockdown. No matter what you do, things are going to fly around. My objective was to try to minimize the number of flying objects and to do my best to ensure none of them were high mass like batteries or anchor and rode, etc.
Mike Cunningham
Freedom 30 (Mull) Hull #3
Build date...June, 1986 . Freedom Yachts USA, sloop, shoal keel
Gun Mount and pole retrofitted (purchased from a Hoyt Freedom 32)
Yanmar 2gm20F , 1600 hrs fixed two blade prop
e-rud and ocean racing equipment
Top

I was looking for your post on the gunmount spinnaker and came across this post. I don't recall having read it before. Good info! And now to add a few more things on the ToDo list for this weekend..... It just doesn't end, does it?
Kynntana, Freedom 38
Top

Ha Ha, now you've done it. I got the secret sauce for resizing photos so here are some prep items for this year. 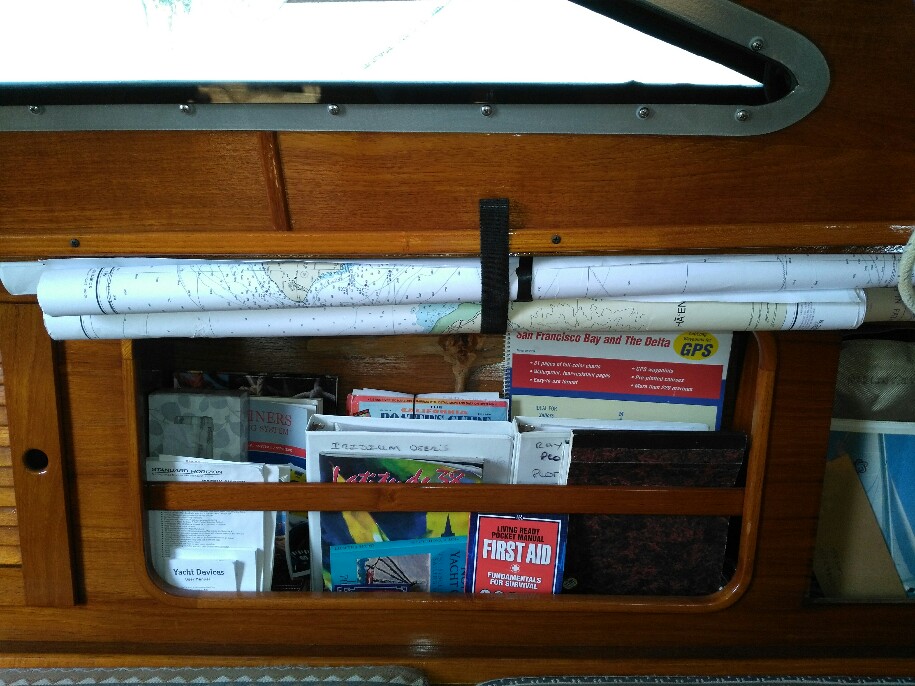 Use velcro to secure charts dry and out of the way
easy chart stowage using velcro.jpg (165.55 KiB) Viewed 6846 times 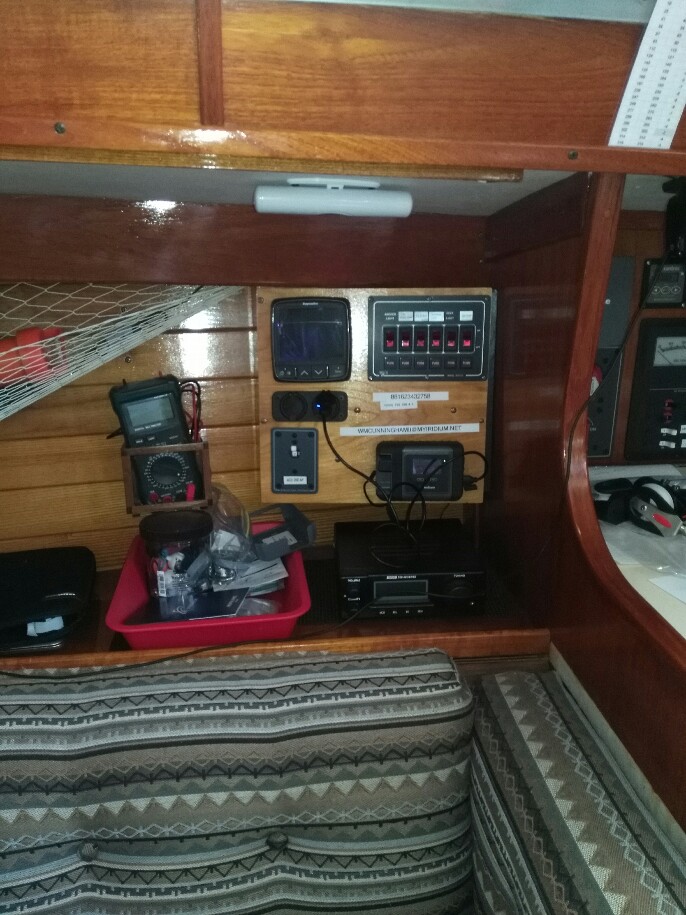 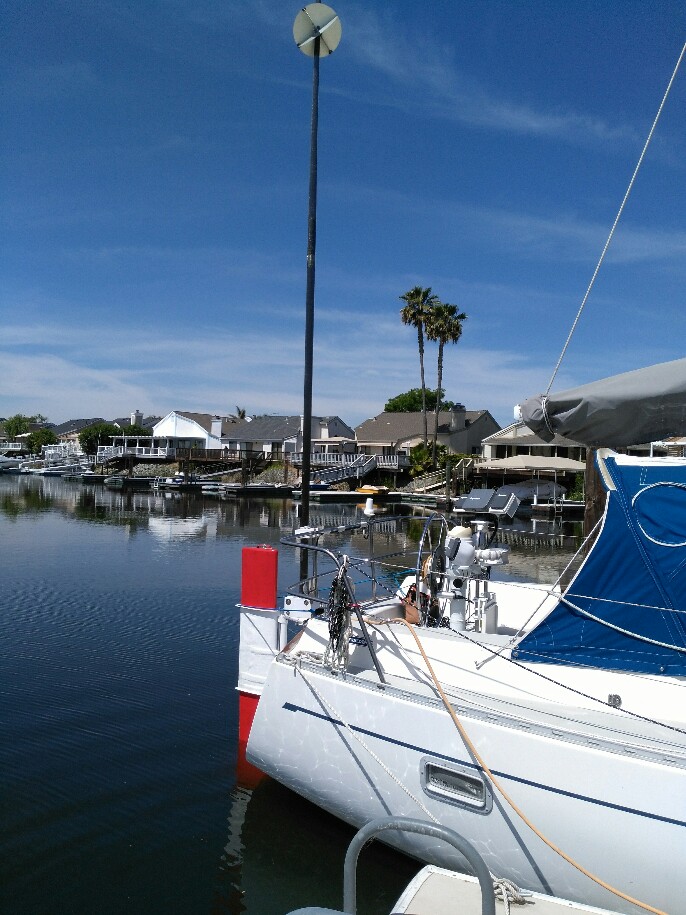 And a few more 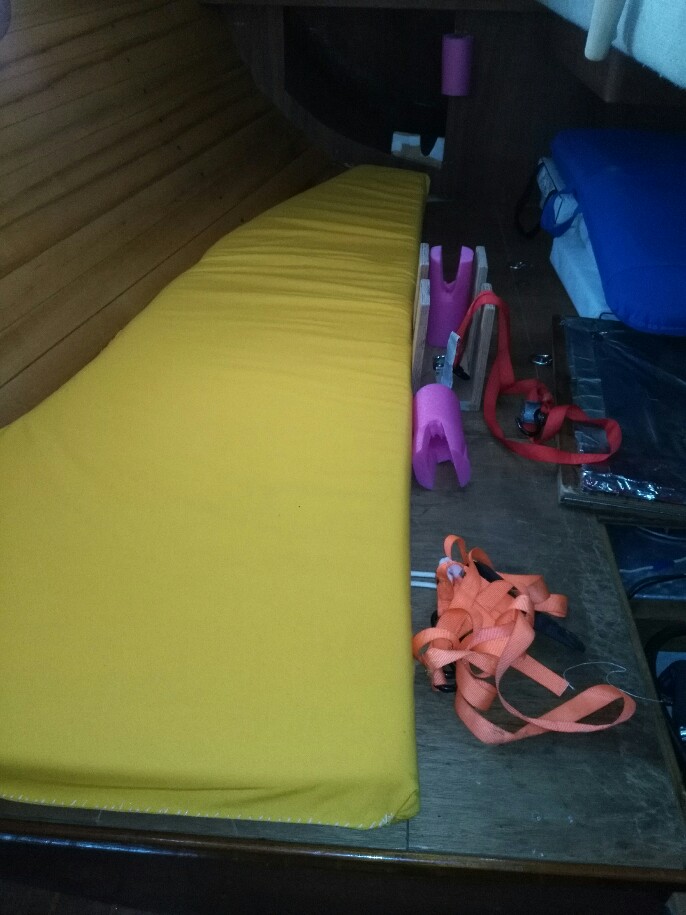 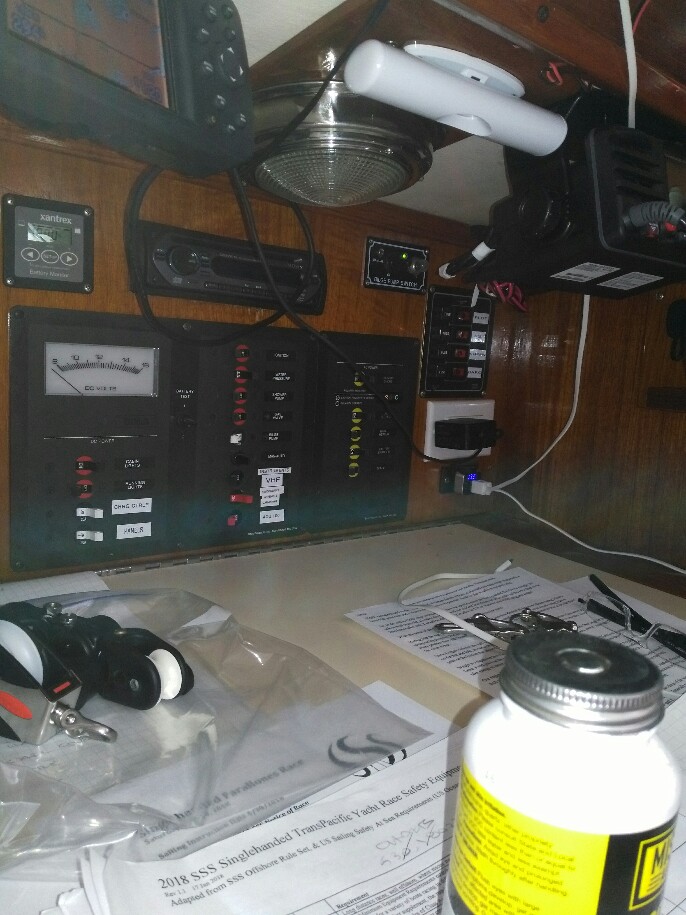 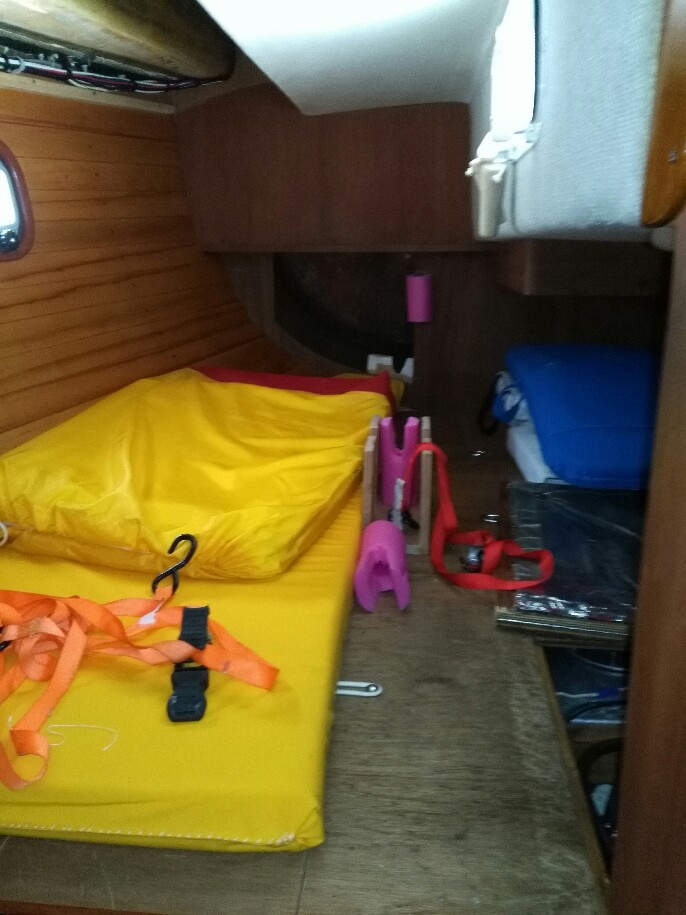 And a final few 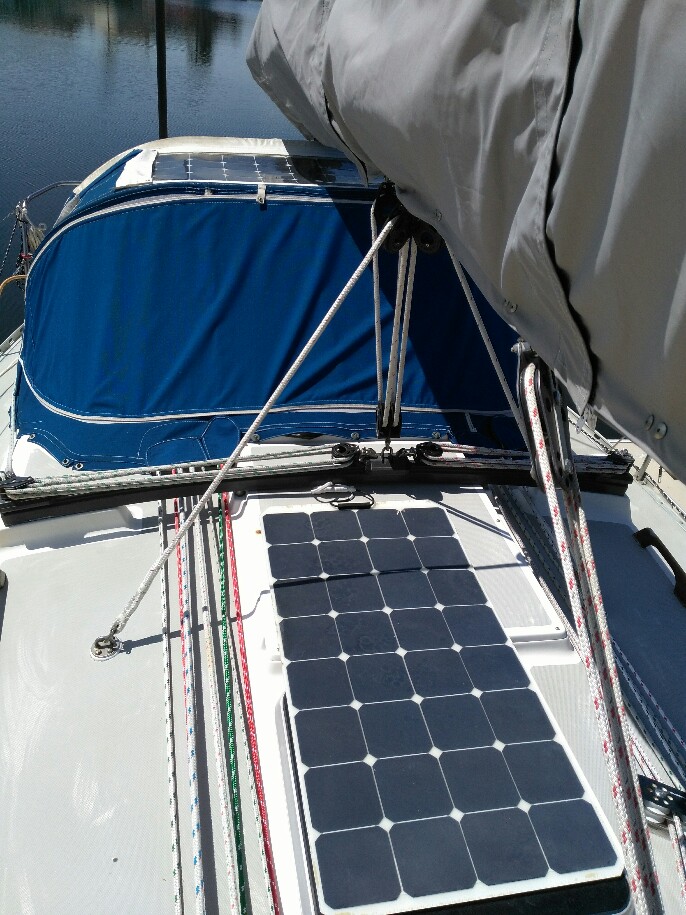 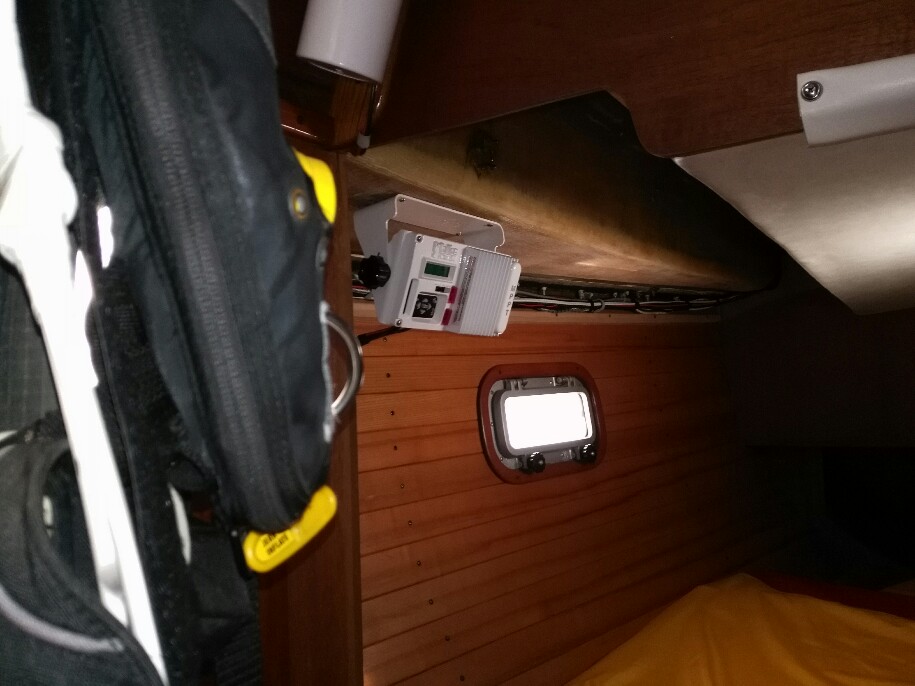 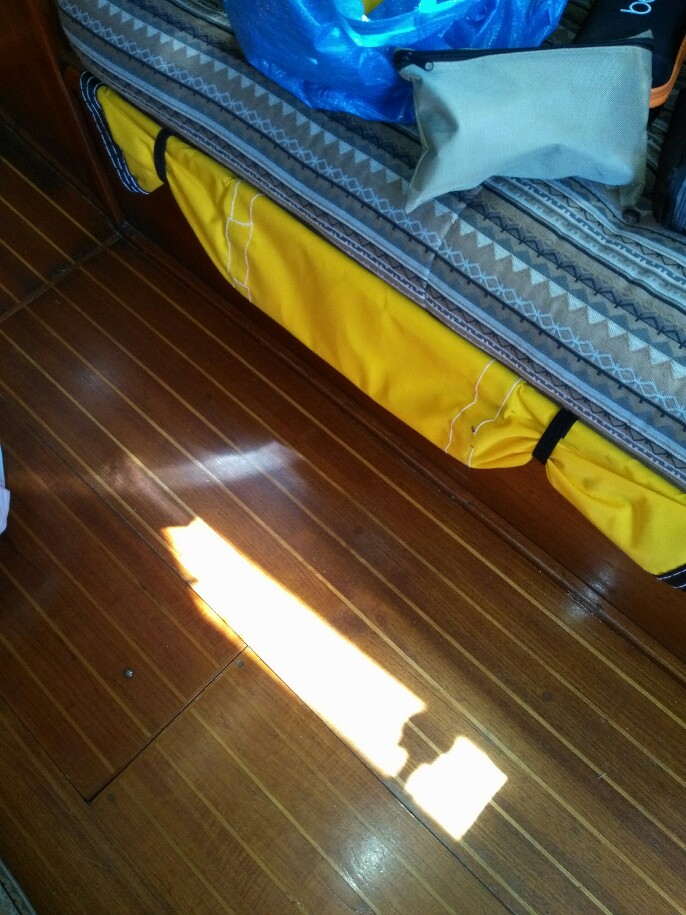 added lee cloths to port and starboard settees which is normally where I sleep at sea
lee cloths.jpg (168.56 KiB) Viewed 6844 times

I have also added a yacht devices wireless interface to the Raymarine STNG network. This broadcasts data throughout the boat for use of cell phone tablet as remote instrument. It is a very small unit which Plugs right into and is powered by the STNG network terminal strip. Very cool. Pic below. It is the little black cylinder sticking out of the stip socket.

Daaang....you've been busy! Nice work. I'm hoping to make the lee cloth for my starboard settee soon. I like how you have it rolled up nicely. I'm going to copy that

For the leecloths I sewed a strip of 1 inch webbing across the bottom then bolted the cloth to the settee behind the fiddle trim on the front of the settee. This makes it very secure and really easy to roll up and secure with small pieces of velcro. This is where my new handholds came in handy. I hadn't thought about it at the time but I added side straps to the lee cloths and wrap the straps around the handholds to give the top of the leecloths solid tie down points.
Mike Cunningham
Freedom 30 (Mull) Hull #3
Build date...June, 1986 . Freedom Yachts USA, sloop, shoal keel
Gun Mount and pole retrofitted (purchased from a Hoyt Freedom 32)
Yanmar 2gm20F , 1600 hrs fixed two blade prop
e-rud and ocean racing equipment
Top
Post Reply
10 posts • Page 1 of 1