by Wasatch
Garry Hoyt mentions using a mizzen staysail a number of times in his sail handling tips. I have the rig and sails from a F36 cat ketch and was interested to hear if, and how, folks are using their mizzen staysails. I sail in the PNW and have pretty light conditions in the summer.

I've been thinking of buying a used symmetrical spinnaker or reacher to try the concept and see what gains it provides in light air before buying a custom sail. Any thoughts on what I should be looking for? Interested to hear your thoughts and solutions for sub 10 knot wind conditions.

by peaceandfreedom
I recently started flying the mizzen staysail on my F38 CK. Two weeks ago, on a broad reach, I flew it wing on wing with the mainsail while the Mizzen was doused. With a preventer on the main boom, I can sail deep by the lee. Winds were around 15kts. Boat handled beautifully. On a beam reach I have sailed with the mizzen up and down. I prefer dropping the mizzen when flying the staysail. No loss of speed and much better boat handling with the Mizzen down.

I have flown the staysail while racing with some success, but it's lot of work. It can go between the masts when goosewinged - tacked to the weather rail amidships or when reaching with the tack well forward. In both cases, the sheet is lead to the end of the backsail wishbone, then forward to about level with the wheel.

My staysail is horrible - far too baggy and like some of the cruising chutes from a previous era. When reaching it generates a lot of weather helm.

The biggest hassle is rigging and moving the runner, which is just a rope from the back masthead inside the staysail halyard block - lead to the weather rail level with the wheel and then to the aft mooring cleat. To gybe, you have to let the staysail blow ahead and move the tack while keeping it all clear of the gybing frontsail - light winds only! And then set up the runner after gybing the backsail and then get the sheet back to the end of the wishbone.

For photos, see http://www.yachtingimages.co.uk/ and search on sail number 3534C. 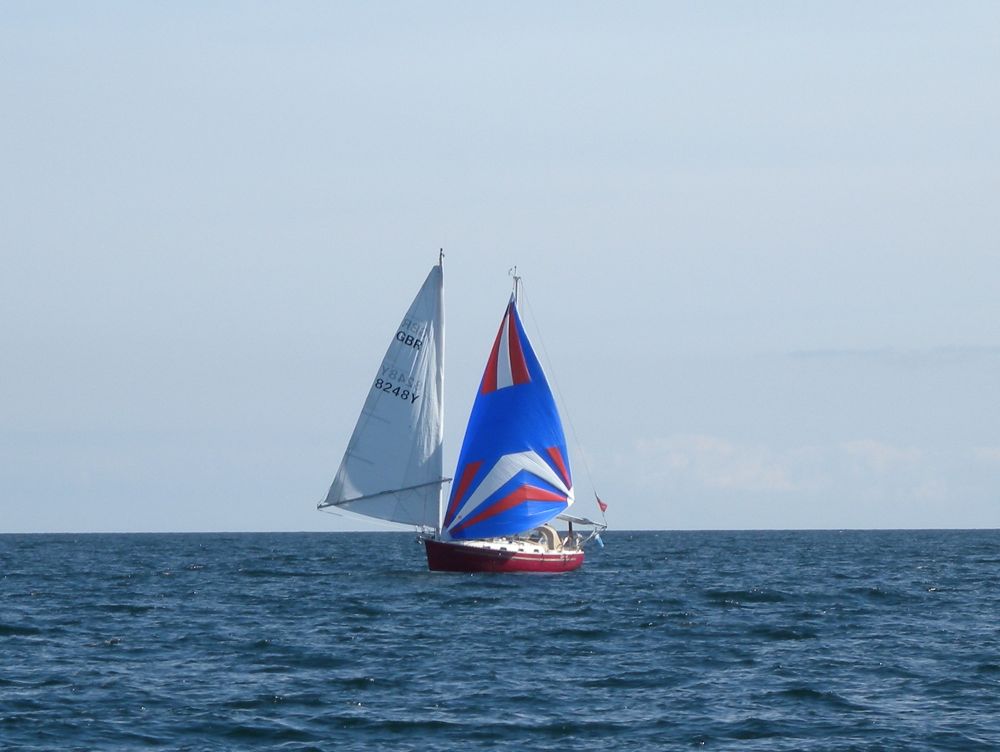 
We set a mizzen stays'l as Mike describes in light airs. It's quite effective, but you can't gybe the main without dropping it. If the airs are very light, you might even try without the running backstay, but there is some risk.
The P.O. of Castaway described the effect of the deck level block for the runner, breaking in an acceleration zone in the Canaries; he said the mizzen mast "bent like a bow, until I could free the sheet!", and that was with a small 'blade' stays'l. 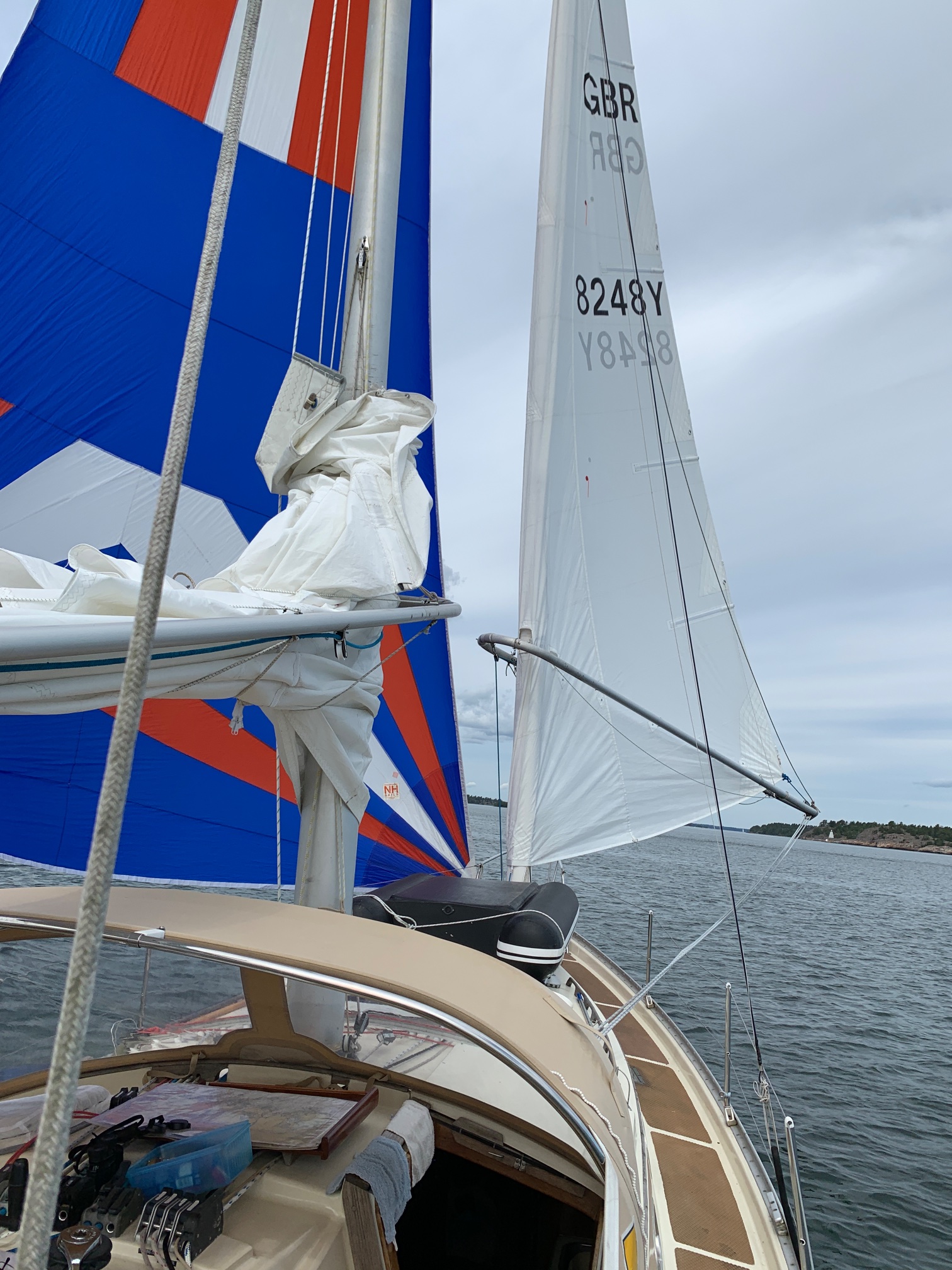 
You can see the rather manky backstay on the left of the picture. We had set it even in 6-8 knots of true wind. We usually clip the tack of the big sail to the toerail near the main mast. The other ones tack to pad eyes on the coachroof (under the dinghy in this shot), but we almost never use them, unless we have a long board upwind in moderate airs. We did use one to good effect in the only race we entered, but dropping it quickly enough to tack after crossing the finish line at 8.6 knots was somewhat fraught, due to the proximity of the ferry pier!

Mike: some nice pictures of Arran Comrades there! We have very few of Castaway under sail – this one was sent to me by a fellow Cruising Association member, Dr Kidson.

Seeing as how we're in General Sailing:

Yachting Images used to come to West Highland Week and offer licensed copies of their snaps after the races. I bought a few - not cheap - but hey! - so in following regattas, they always came to me and I got more, including in some sort of anniversary year, when they were free.

Wouldn't it be nice if we have some recognized signal between yachts to say "Please take my picture"?

Heading for lay-up, I took a floating line round the prop off Port Appin and was fortunate to get onto a mooring at Linnhe Marine under sail from where I begged a tow into the shallows, 2h before LW so I could wade in and clear it. Bread knife bolted to boathook didn't really work No apparent damage despite the line being forced forward under the heel of the rudder, lifting it 10cm. How did it do that when I was doing 6 knots forward? I always carry a ladder! 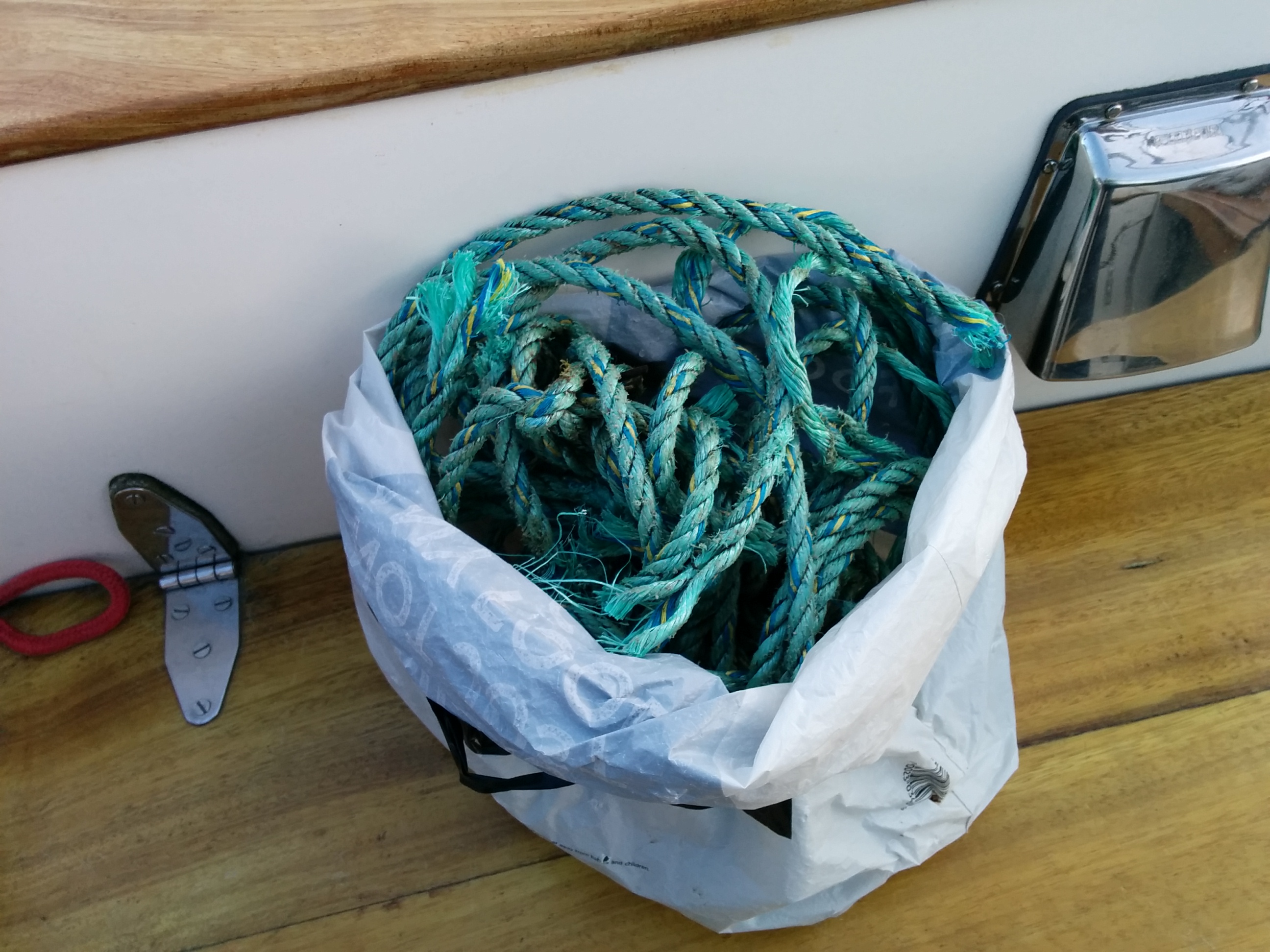 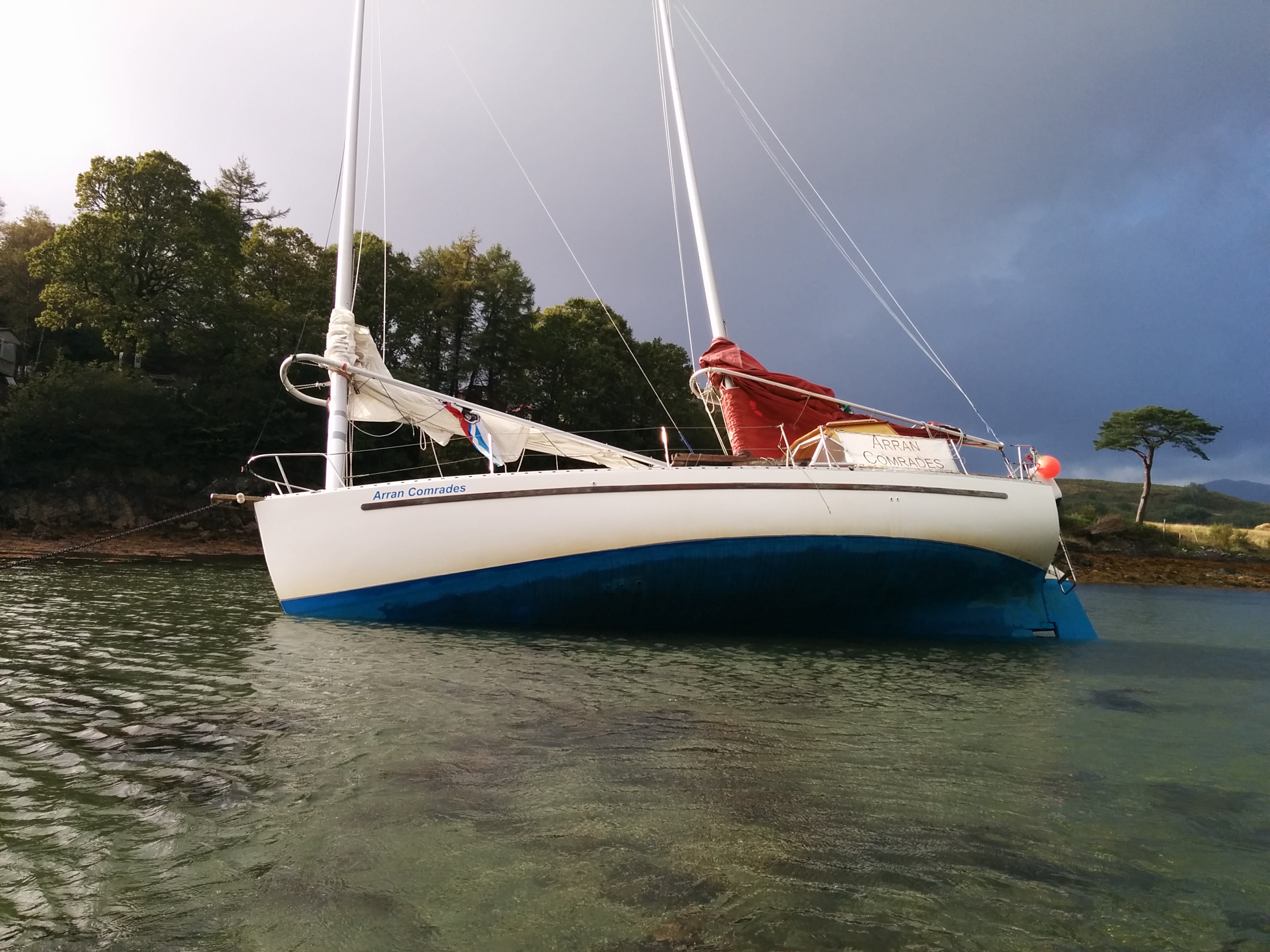 by Wasatch
Thanks Gentlemen!

I appreciate the information and photos. I swear, a good picture is worth a thousand words. I'll keep the eyes peeled for a flatter cut reacher that will fit. I borrowed a symetical spinaker for a buddy to try when the winds are right. We'll see how that goes.

Does everybody use running backs when they fly these? Makes sense with stronger winds, but if it's over 12, I don't think I'd need the boost from a staysail, so would plan to drop it. However, I don't want to re-invent the wheel, so I appreciate learning from the group wisdom.

Arg, getting a line in the prop is always my worst fear. Looks like a coolhead and steady hand made the best of a bad situation. Nice save!

by arrancomrades
Thanks Matt, and oops:- the rudder lifted 10mm not 10cm.

When using a staysail, you can do without a runner in light winds, or might better lead its halyard aft and out to the rail, but beware that it can become very powerful in a gust and it's probably bigger than the backsail and less prone to spilling wind.
All times are UTC-04:00
Page 1 of 1