Well my F21 is out of the water and back in the drive for the winter and I have started or am thinking about a number of improvements. Next on the list is to replace the port lights. They are a bit hazy but worst of all, the plastic surrounds are cracked and were leaking when I bought the boat but now have a liberal covering of silicone in the cracks and around the outside. They aren't leaking again yet but don't look pretty and I am sure this situation will not last long. 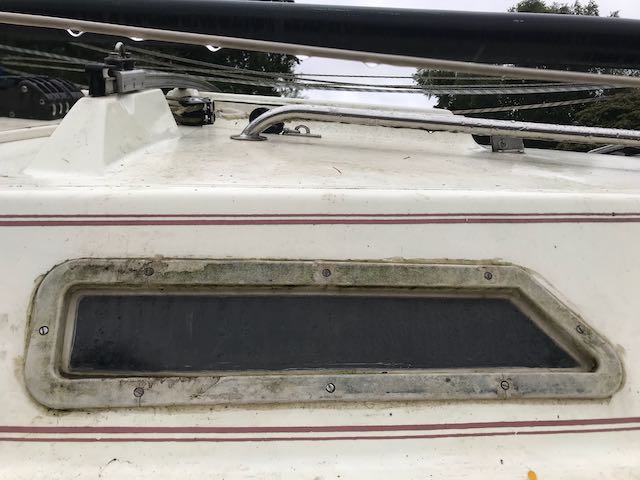 I have been searching for replacement frames but none I have found could be fitted successfully. I don't mind cutting the opening out some more but the problem then becomes the curvature of the cabin side. With the current size there is 1/4" or more flex over the length of the frames and I have not found anything specified for that much bend. My current plan is to fix the acrylic directly to the cabin side using VHB tape followed by a bead of silicone around the perimeter. This is the technique used for recessed port lights on modern boats.

I wonder if anyone else has been down this route or found a supply of F21 size frames.

p.s just seen the thread on "port windows F32", which was very helpful, seems the surface mount with VHB tape can be a good option.
Rockin - F21 twin drop keels - located Milford Haven
Wintered in Shropshire where I am when I’m not sailing
Top

Made a start this afternoon. Removed the old plastic frame. I suspect the cracking in the outer was the last attempt to reseal ten. Prising plastic away from a silicone seal needs some force. The inside frame came away intact but I do not think I will reuse it. 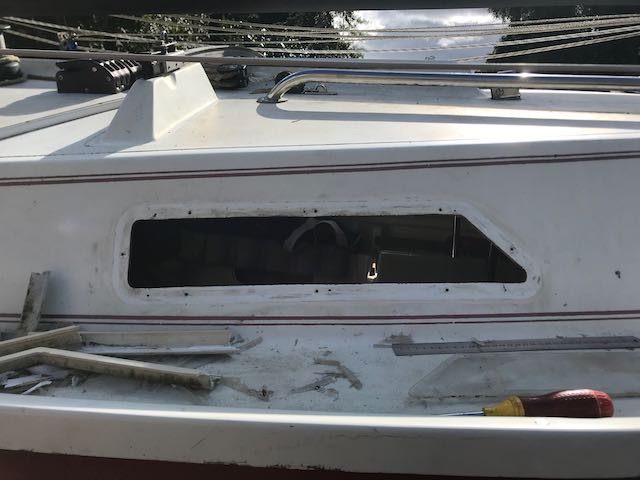 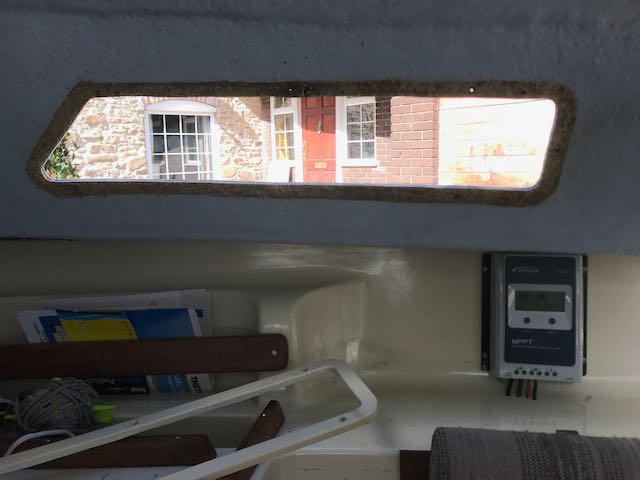 Cleaned up the surround, polished it to take away some of the oxidised surface 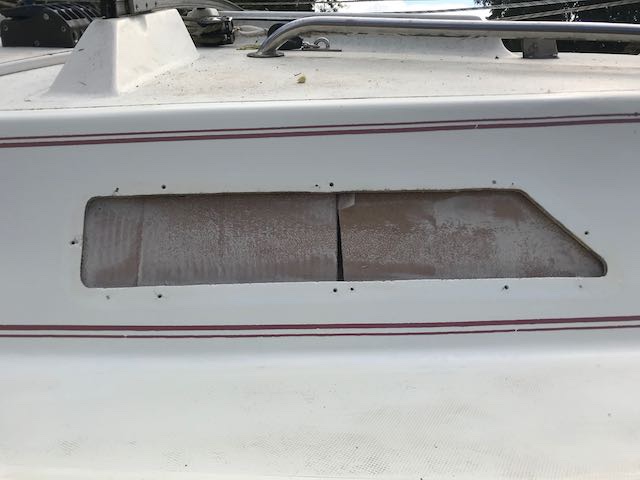 then drilled out the holes and filled with gelcoat.

Today was the first dry day for a while so I decide to have a go at fixing the port light. First I applied the VHB tape around the cutout. 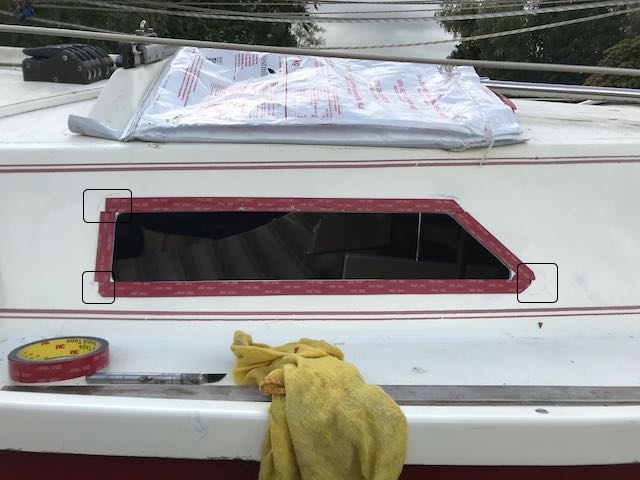 ... then removed the backing tape and carefully placed the new acrylic pane, you only get one chance as this stuff sucks like the proverbial to a blanket. So far so good. I applied pressure with some wedges and a pole between the stanchions and left for 30 mins. By this time it has 50% of its strength according to the instructions. I then masked up and sealed with marine grade silicone. 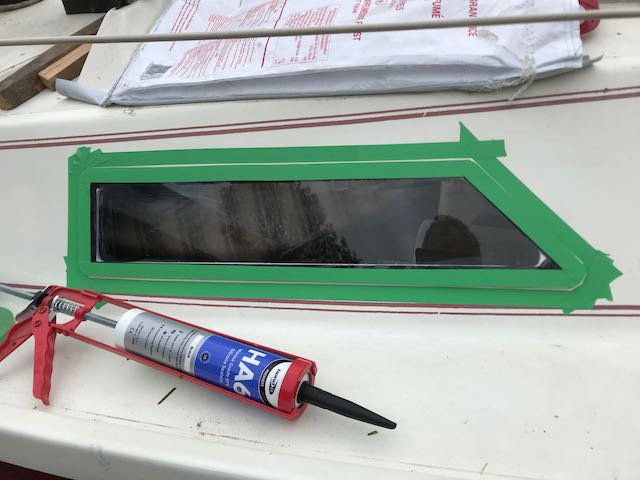 I had two problems... basically I screwed up. The first one was minor, the lower port light edge was not flush with the pane, so a bond only occurred on the outside of the tape strip. I tried pushing against the wedges from the inside but it the gap was too big or fibreglass not flexible enough, so it stays as is. I don't think this is a big issue. The second was a bigger problem in that it ruined the effect. there were some notches in the tape at 3 of the corners (highlighted in the pic). I had assumed that the silicone sealant would fill these up. However I was filling blind because of the masking tape and when I peeled it off there were white patches clearly showing through the acrylic at these corners. I had to fiddle around with an old credit card poking silicone into the gaps and made a right mess in doing so, which meant I had to clean up, tape up a second time and redo a slightly larger bead.

I'll post a pic of the finished port light later, when it stops raining as it started again just as I was finishing off the second bead.
Rockin - F21 twin drop keels - located Milford Haven
Wintered in Shropshire where I am when I’m not sailing
Top

Just took a look at the finished light. I think a part of the problem on the lower edge was the tape not going on quite flat, I can see some small ripples on it. Anyway here is the finished result, the reflected light shows what I was saying. Anyway, it is certainly an improvement on what was there before. I hope I can do a better job on the second one, we learn by our mistakes.

Finished off the second side yesterday. Same problems as the first. It is difficult to get a seal across the whole of the width of the VHB tape. The lower bottom window edge seems to slope inwards on both sides. This time I had no irregularities in the tape but the result was the same. However there is no problem with adhesion, this stuff sticks like you know what to the proverbial blanket. There were a few areas showing white between tape and sealant but not bad enough to redo this time. My overall conclusion was that its made a big difference, both in the external cosmetics as well as internally, where there is significantly more light by losing the frame. The cost was minimal and the job relatively easy. 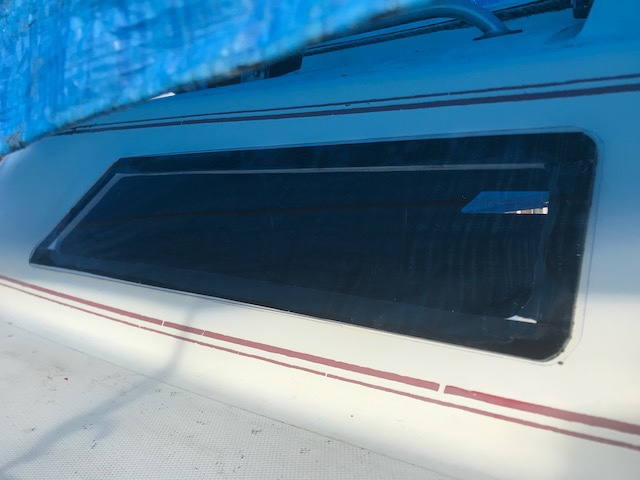 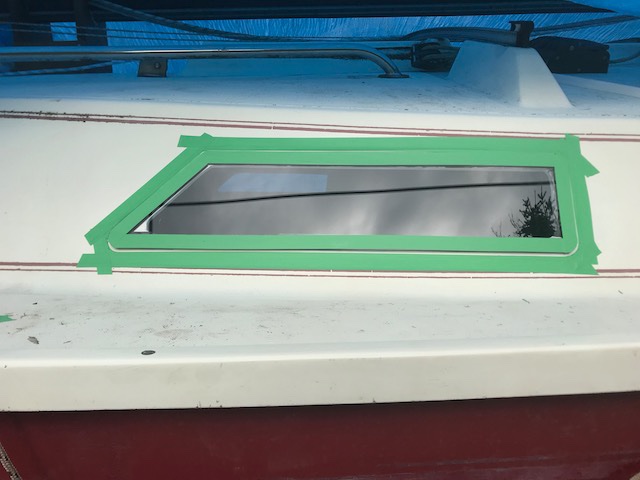 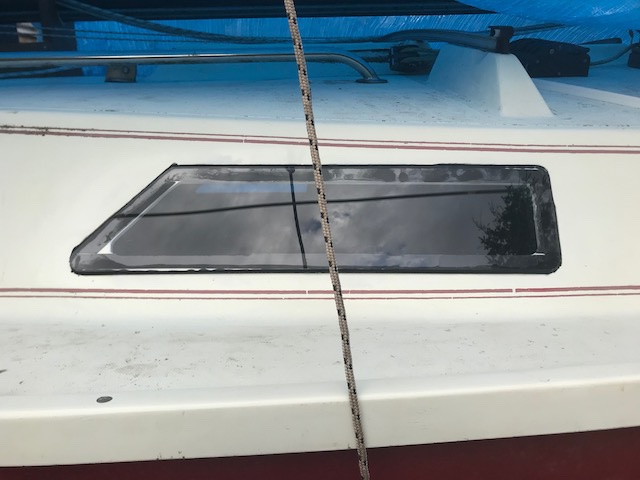 nice work on these. on my columbia, I used VHB and dow 765. It was a slightly different situation but the result was the same. I used a wooden roller along the edges instead of trying to brace in the portlights and it has worked just fine.

yours look really great and only you will know where the "flaws" are.
S/V Glory, 1992 Freedom 45 CC TM WK
Top

Thanks for your comments Lance and welcome to the forum.
Rockin - F21 twin drop keels - located Milford Haven
Wintered in Shropshire where I am when I’m not sailing
Top
Post Reply
8 posts • Page 1 of 1