I'm in the process of re-doing the headliner for my Freedom 40/40. We've had it in the Caribbean years, and I think that the heat really did a number on the foam backed headliner material. It was sagging, so I decided to replace it while I had the boat near home.

I decided to utilize NaugaSoft (http://www.sailrite.com/Categories/Naug ... nyl-Fabric), which is a fabric backed vinyl (Naugahyde) product. I've been trying to decide what adhesive to use and was thinking of using 3M's Fastbond 30NF water based contact adhesive (http://www.shop3m.com/62427475306.html) to keep down the VOCs since I'll be doing this inside during the winter. I have an HVLP sprayer which, based upon the literature, should be able to spray it.

Does anyone have any experience using a water based contact adhesive for this application?

We are also replacing some headliner in some areas of Marquesa. I've not used that adhesive but I have sprayed stuff in closed spaces before and I was not happy with the results. Check the MSDS carefully before you get going. Brush or spreader might be a better approach.

I used a new water based version of "contact cement" to redo my liners on marine plywood couple of years ago. Desaster, took ages to dry on the back of the vinyl material. I finally had to go back to traditionnal contact cement (and lots of ventilation) to settle the case.
BTW, Michel uses a fantastic product for lining replacement, named Sintra here in North America
http://www.alcancompositesusa.com/prod_sintra.html
Much easier to work with than plywood/vinyl
Alain
Naïade, F39PH '83, Montréal
Top

My issues were over-spray and fumes. I guess the HVLP gun might mitigate that? Is the glue still water soluable when it's cured? I'd be worried about condensation and just plain high humidity loosening it up. I will probably use plain old rubber cement or some form there of. Or the 3m spray can stuff which I've found mostly easy to control. Of course I might wait and see how your idea goes! I'd love another excuse to buy a HVLP setup. Is your's self contained or does it rely on a compressor?

Inside during winter? Did you mean "inside the boat" or "inside (as in not-outdoors)"?

In my F-40 Aft Cockpit, the foam rubber backed "naugahyde" material was adhesed to these panels which were held in place by the teak battens which make up the seams between them.

"Inside the boat" would be a very annoying place to do any of this work. Adequate ventilation in a shop during this process could be provided by a box fan and some (many) opened doors & windows. A respirator might still be a good idea. You can get quite "drunk" from the fumes from solvent-based contact cements.

Understanding that the properties of certain adhesives are such that, although water-soluble when uncured, they become more resistant to moisture attack when cured, why would you risk failure in an inherently humid & damp installation by using an adhesive which is soluble in water?

As an alternative, google up "foamed pvc sheets". This is a product designed for outdoor advertising panels (principally) which has been used by others to replace both the "door skin" panels and the finished surface. I plan to use it on mine in the near future.
Top

I have good experience with foamed PVC sheets. No glue or fumes involved. It's a slick material however, so if you like the soft headliner-type, you won't like it. I like it better than the soft headliner for severaL reasons:

- no glue, no fume, no mess; you use a few staples to keep it in place and then put the battens on;
- easy to keep clean; no creases that collect mildew;
- easy to cut or saw;
- good light reflection without giving the appearance that you live in a kitchen cupboard. 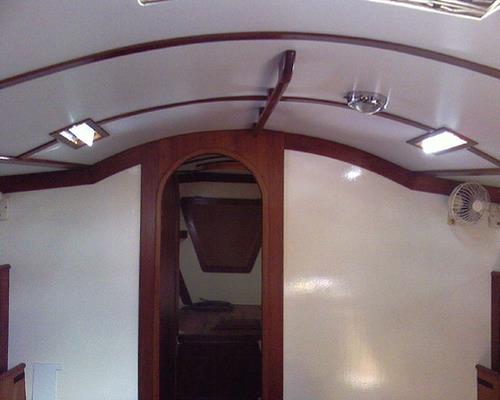 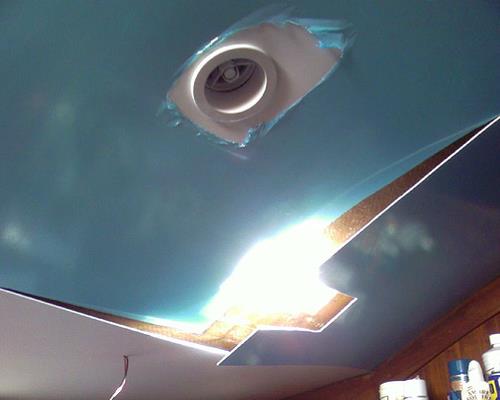 I note (from your Flickr page) that you recommend the 4 mm thickness of the foamed pvc sheets.

Michel has posted many more photos of this project (and other projects) at Flickr...the link is

I'm very seriously considering some fiberglass panels that are sold at Home Depot. They are very inexpensive, waterproof light and bright. The headliner in the forward cabin is fine. The headliner in our v-birth has been awol since we purchased the boat and I'll have to replace the headliner in the aft cabin as it's deteriorating. I'm probably going to make up panels that are trimmed with teak glued right to the panel and then use industrial velcro to put them up. I can pull them down to clean behind them this way and avoid the whole trapped mold issues, get to wiring, etc...

I like your idea of having the whole overhead easily removable (except that you'll have problems doing this around the trim for the hatch covers and where the grab rails are attached, as well as any place where there are things attached to the bottom of the overhead that penetrate it...like lights and the little chains & hooks that hold up the opened portlights). The thought of (repeatedly) dealing with all those cut edges of the fiberglass sheets is enough to dissuade me from considering using them. Beyond that, it will reflect (rather than absorb) noises inside the boat. I think I'll stick with the foamed pvc idea myself, and line the bottom of the overhead with "Reflectix" (foil coated bubble wrap) for insulation while I have the whole thing ripped apart.

I'd forget the industrial velcro if I were you. I don't think you'll be happy with the life of the adhesive on either the bottom of the overhead or the fiberglass panels. Heat, moisture, and the constant stress of gravity will have the whole thing down in your lap at some point.

What you want is the 3M Marine Reclosable Attachment System (Part 051135-06539) available at your favorite big-box marine stores and online here and there.

It's way more expensive than the Industrial Velcro, but the glue is amazing. It uses little interlocking plastic protrusions on both pieces, rather than fuzz on one or the other.

You won't need an entire strip at each attachment point. Stick two pieces together, cut them (together) into 1" x 1" squares (you'll get 6 out of each package of four strips...about six and a half bucks per package at Jamestown Distributors). Maybe you can find a better bulk price.

Search NexTag for sources of larger quantities, cuz you can buy it in 150' lengths if you want.

It may seem like a "Duh" kind of thing, but to install it, put the two halves together, peel the adhesive off of one side, stick it on either the overhead or the panel, then peel the adhesive off the other piece and press the panel to the overhead (like you would if you were using contact cement). Rubbing hard over the attachment points will seal the glue to the surfaces, but you may want to prop it up with your extendable boat hook with something to spread the pressure over the panel while the glue sets up a while.

I have no doubt that, with enough of this stuff, you could stick a loaded 48 quart Igloo cooler on the overhead if you wanted. I (over) used this stuff to attach a power strip to the (wooden) back side of an aquarium. When I later removed it to replace the aquarium, it was all I could do to get the piece off of the back of the power strip, and I'm sure that the bond to the wood was stronger than the strength of the wood fibers beneath.
Top
Post Reply
29 posts