Last year I replaced my shaft, cutless bearing, shaftseal and engine mounts on my Yanmar 3jh3e (F38). I did all the work myself but I paid to have the engine aligned ($250) by the marina when it was launched. I asked the head mechanic if it was aligned and he said I did such a good job he did not have to adjust anything. I then asked him if he tightened the hold down nuts on top of the mounts and he said yes (I did not torque them down tightly because I knew the shaft had to be aligned). I peaked at the engine and it seemed fine but I did find a 10 inch crescent wrench that I gave back to the mechanic.

I used the boat for two weeks then one day while motoring back to the harbor (about 2700rpm) after a race I hear a loud squealing sound. It was so loud that at first I thought it was a police boat siren. I backed off the throttle and realized it was coming from the engine compartment. When I looked my new Tides marine shaft seal was twisted out of alignment and leaking rapidly because the hose was tightly twisted around the shaft. I un-jammed the seal which reduced the leaking to simply dripping and motored back to the mooring slowly.

I talked to the manager of the marina to at least get my money back but he said I should have inspected the boat after a couple of weeks! I explained the significance of the wrench, that you can't tighten those screws properly with that wrench but he was obstinate and defensive. So I gave up and I simple will never do business with them.

I removed the Tides marine seal and inspected it. The plastic was worn so it was no longer round causing it not to sit properly and leak. I chose to replace it with a Norscot seal. It is made of bronze and has three seals as apposed to only one in the plastic Tides seal. It does require a ATF lubricant but after a whole season I only used a couple of ml. It is even more compact than the Tides so it fits nicely in the tight space in the F38. I aligned the engine and tightened the hold down bolts properly with a breaker bar! 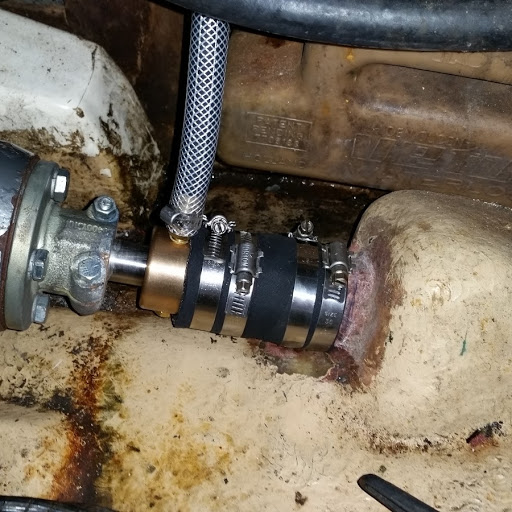 Very interesting. At the recommendation of Paul Dennis I am planning to replace my Norscot seal with the Tides Marine seal, since it continuously leaked ATF into my bilge, despite being rebuilt last winter (new lip seals and shaft hose). However, your story gives me pause. Apart from the fact that the Tides seal was ruined by your shaft being misaligned, is there a reason that you opted not to replace it with the same seal? Had you had any trouble with the Tides seal previously, or did you just want the security of the bronze part?
Josh
Sunset Spy
F38, Hull #152
Boston, MA
Top

I had no trouble and was very happy with the Tides Marine Seal before the incident. After the incident there was a steady drip when the shaft was still and a steady stream of water when the shaft rotated. When I removed the seal I expected to see more damage. The lip seal seemed worn on one side and the aft plastic tube portion was out of round. This caused the seal to wobble and cause the leak. The very flexible silicone hose wrapped tightly around the shaft and squealed loudly but did not break and showed no sign of damage.

I originally purchased the Tides Marine seal based on advice from Paul Dennis. Dolcetto was repowered with a 40hp yanmar so I have less room between the coupler and stern tube. This causes the forward end of the seal to be only about a half inch away from the rotating coupler. This made me very nervous especially with the flexible silicone hose. After the incident I started investigating new seals. As you can see the Norscot is a bit more compact so the is greater distance between the seal and coupler.

In regard to the Norscot seal you had rebuilt. Is it possible that the forward seal was installed backwards? This would cause ATF to leak into the bilge.

Very interesting. It's certainly possible, as I didn't install the new seals myself. I'll have to take a look before I make up my mind.
Josh
Sunset Spy
F38, Hull #152
Boston, MA
Top
Post Reply
4 posts • Page 1 of 1