I had this idea during my last passage, and I wanted to run it by the forum and see what you folks thought about it. It seems sound to me, but I could definitely be missing some fatal flaw, and I’d rather find that out before I start making cuts.

The problem that I’m looking to solve is that on the F36 and F38, the location of the fuel fill makes it susceptible to a wave washing over the bow, down the side-deck, and into the tank. As a result, I always have to be extremely careful about when I refuel underway. If conditions are rough, I often find I have to delay refueling until past when I would usually do it, as water in the tank would be objectively worse than running out of fuel.

For context, I keep four 5-gallon jerry cans in my cockpit locker, with the handles tied with a trucker’s hitch to a pair of padeyes on the centerline bulkhead to keep them secure. After untying a jug and hoisting it up on deck, I use this “shake siphon” from Amazon to transfer the fuel from the jug into the fuel fill.

Last weekend, when I was in the locker untying the first jug to hoist up to the cockpit, I remembered that the fuel fill hose that I was trying to pour this into was actually right behind me, with perfect access. What if I put a T into that hose, and just siphoned into it that way? Then I could refuel in the roughest seas without leaving the protection of the locker, with no risk of contamination. As a bonus, it could even be done without moving or untying the jugs.

My initial thought was to make the fitting out of PVC, but I found a much more elegant solution in brass. The Pro-Pal Ball Drain from Webstone is a ball valve with a closable drain on the side, which is threaded for 3/4” garden hose. They also have a simpler version that doesn’t have the main ball valve. I went with the double valve version because it could potentially be set up to divert from the deck fill to the side drain (bypassing the tank), which could allow me to fill up the jerry cans in place from the deck fill. Not sure if that would work, but I figured it was worth a shot.

So, what do you think? Is there anything I haven’t thought of? 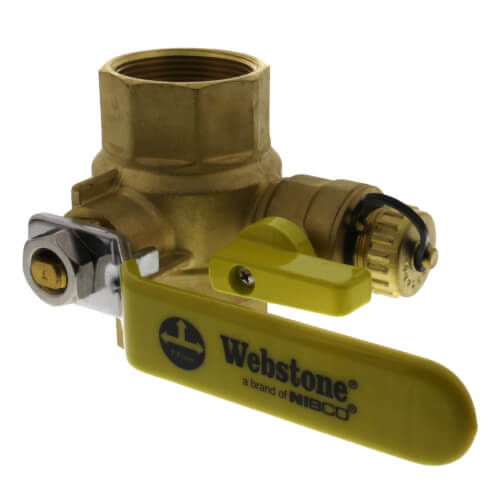 After noting quite a bit of particulates and a bit of water in diesel purchased from my local fuel dock I now refuel primarily from jerry cans so I can filter the fuel and remove water before it is transferred to my main tank.

I was also concerned (after reading about it from Nigel Calder) about water washing down the deck over the fuel fill entering the main tank in the event of an O-ring failure.

1. I put in a new fuel fill deck plate that allowed me to screw in a bronze nipple and install a full diameter ball valve below deck in the fuel fill line. I keep it closed unless I'm fueling through the deck fill and I can clean out any water that might leas in through the fill O-ring before opening the valve.

2. As to fueling from the jerry cans - I mounted a switch, small fuel pump and a Racor water separating filter to a board mounted in my lazarette. I have a hose long enough to reach the bottom of a jerry can in my cockpit attached to the inlet of the Racor filter, The outlet of the filter is connected to the fuel pump and the discharge of the fuel pump is connected to a hose barb I installed in the side opening of a bronze wye installed below the ball valve installed for item 1.

I can refuel "normally" at a clean fuel dock simply by opening the under fill plate on deck, cleaning out any water and then opening the below deck ball valve. I use a Baja filter when I do that.

When refueling from jerry cans I leave the deck fill plate and ball valve closed, open the lazarette, put my fueling suction hose into the jerry can and flip the switch to turn on the fuel pump. Works both at the dock and underway as might be necessary.
Heart's Desire
Freedom 30
Shelton, WA
Top

Sounds like a good idea, and it's a very smart looking fitting, BUT, you might have problems both filling and emptying the cans with only one of these in the main filler pipe. To use your 'shaker siphon', the ball fitting would need to be below the level of the cans, or they would not empty by siphonic action. This might be a problem anyway, if space does not allow such a position. If it is low enough to allow siphoning, then filling the cans from the deck filler would mean having enough head of fuel to force it up a pipe into the can. Is there sufficient head in vertical measure from the deck filler above the cans? If you have the ball fitting above the level of the cans, you will need a pump to get the fuel into the tank, pretty tedious if it is not powered, and difficult in a rough seaway. Having a pump would mean no reverse flow, so you would need a different hose for filling the cans.

I think I would stick with just emptying the cans into the fuel filler line, with the ball valve set as low as is practicable to allow this. You would never need to fill the cans at sea, and lifting them onto the dock to fill them reduces the chance of spillage into the locker, which probably drains into the bilge, with that wonderful aroma pervading the whole boat. Of course, you have to lift 20kg of fuel back into the locker, four times, but the answer to that might be a strong, young, foredeck hand!

To use your 'shaker siphon', the ball fitting would need to be below the level of the cans, or they would not empty by siphonic action.

Are you sure that would be a problem? The outlet of the siphon is the fuel tank, which is a few inches below the bottom of the cans. I'm not a physicist, but I was under the impression that a siphon will run as long as the surface of the fluid being siphoned is higher than the outlet. As far as I know, the hight limit of a siphon is about 32 feet (10m) at sea level, which is dictated by the barometric pressure of the Earth.

The only issue I'm not sure about is whether the increase in the diameter of the hose at the fitting (1/2" to 1-1/2") will matter. I don't know enough about siphons to say for sure. Anyone have an idea?
Josh
Sunset Spy
F38, Hull #152
Boston, MA
Top

The siphon will cease at the point of the larger diameter of the filler neck, once air gets to the stream the negative pressure causing the draw will cease. I like where you are going with this idea though.
John

That makes sense! I guess I could put it lower (as suggested above), but I’ve decided to keep it high and just get a small electric pump to do the transfers. I will report back with pictures once everything is installed.
Josh
Sunset Spy
F38, Hull #152
Boston, MA
Top

Just wanted to give an update and show some progress shots. The fitting is in, the pump is in place and wired up, and the system works! It was a real bastard getting the PVC inserts into that 19-year-old hose, especially because I had to do it with the hose in place. The wind was so good on the way up to Maine that I didn’t get a chance to test it! However, after a couple days motoring around Casco Bay I had burned enough for a 5 gallon refuel. It worked really nicely, and transferred the fuel quite fast. The only issue I failed to anticipate was the 3” of diesel that can’t make it up to the fitting, and remains in the hose at the pump. It would probably be fine to just leave it there, but I’d rather not risk a spill. Maybe I can add a T there or something, and just drain it back into the empty can after each use. 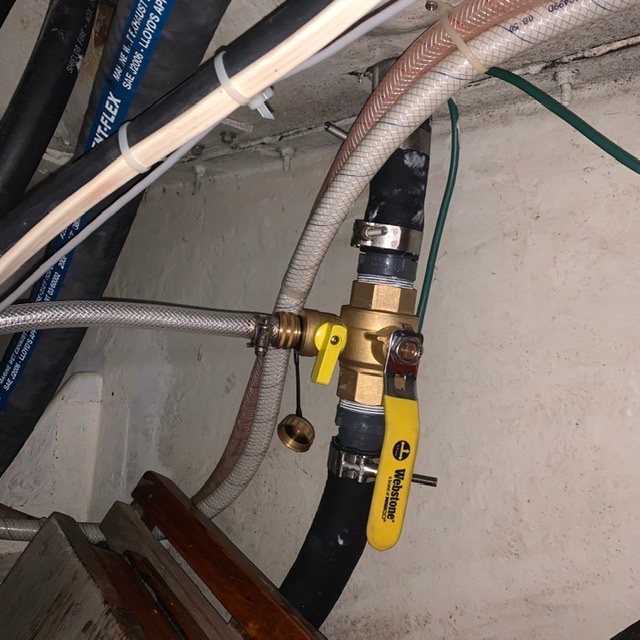 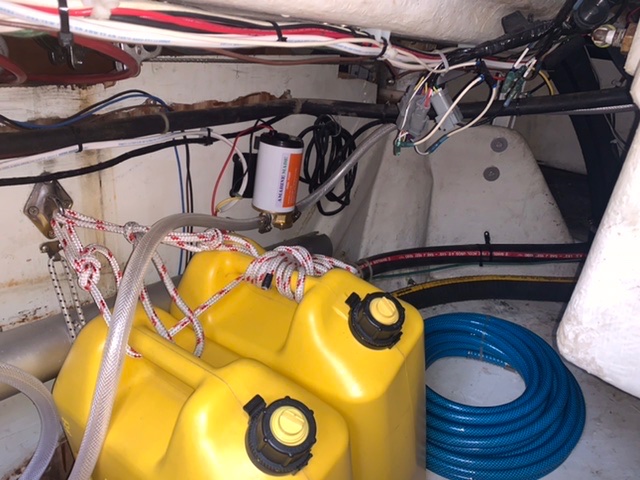 Nice pictures of a nice setup! I'm sure the pump was the best idea; what type is it – diaphragm, piston or centrifugal? And do you still lift the fuel cans to fill them?

On the UK built Freedom 33 cat-ketches, the fuel-filler pipe runs behind the switch panel and the saloon settee. Ours split whilst fuelling, once, and I had to cut the pipe and insert a 4" length of stainless tube to make up the shortfall, so it might be possible to insert a similar setup, but we can motor for 40 hours on one tank, and no longer make long crossings, and I may just stick with 5 litre cans of spare diesel, which even I can lift.
Gerald Freshwater,
s/y 'Castaway', (UK F35 cat ketch, centreboard, 1987)
Lerwick Boating Club
Shetland Isles, Scotland
Top

Thanks! It's actually a gear pump. Yes, I'm still untying the cans and refilling them in the cockpit. This is partly because I need to put together a separate hose to swap in for filling the cans (with a shutoff valve near the end), and partly because I've been sailing alone this summer and I would only want to do that procedure with two people. That setup is not a high priority, just an idea I had that could be useful. It's honestly less about lifting the cans than it is about re-securing them to the bulkhead. I imagine I could come up with a better solution for that, but at this point I'd rather just go sailing

I need to know: how can you motor for 40 hours on a single tank?? How big is your tank? What engine/prop do you have? Is this cruising rpms, or just partial throttle?
Josh
Sunset Spy
F38, Hull #152
Boston, MA
Top

My Volvo type2003 and Kiwi 3 blade prop run the boat at around 5 kts using less than 2.5 litres per hour, and I have a 100 litre fuel tank. In calm water, it uses less than 2 litres per hour. We can motor all the way to Norway on less than a tank full, though it is rarely necessary as we usually have wind, but we have done 250 nm just motoring without emptying the tank. Of course, fuel is expensive in Europe, so economy is important for boaters! Running at 3,000 rpm, optimal power output according to Volvo, only produces 6.5 kt, and uses about 20% more fuel, so we only do that for emergencies, like getting through the lift bridge before it's due to close again,or beating someone else to the last marina berth! Normally we cruise at 2,300 rpm or slightly above which keeps us at 5.5-6 kts in calm water.
Gerald Freshwater,
s/y 'Castaway', (UK F35 cat ketch, centreboard, 1987)
Lerwick Boating Club
Shetland Isles, Scotland
Top
Post Reply
13 posts