Greetings all,
Two weeks ago we had a glorious sail to Block Island, running at 7-8 kts for what seemed like most of it. We motored back against the westerlies in Long Island sound for about 20 hours. No issues to report, temps nominal and good oil pressure and level throughout. We buttoned up the boat and went back to our jobs for the week.

Upon arriving back aboard this past weekend, I went to start up the Perkins and after half a second of hearing the normal starting noises the engine panel went completely dead. Ignition circuit fuse (the big one) blew immediately. I jumped that fuse terminal to determine where down the line the issue was, and the starter fired normally, but the motor was not turning over. Observing the main drive pulley I see it spin about 1/8 of a turn when engaging the starter and locking up.

My first suspicion is hydrolock, though I'm not sure how. I suspect any other prognosis would be a very somber one for Mr. Perkins, but I'm frantic looking for ideas. I am calling a traveling mech who hopefully will have an injector puller as I was unable to extract even the easiest one to reach. I don't see any talk of decompression levers on the 4.108 either.

If there is a question here, it is twofold:
1) Has anyone experienced their engine locking up after running normally for no apparent reason?
2) Can anyone recommend some "freedom-friendly" yards in long island sound? If I'm going in for any major overhaul, I'd like them to first pull the masts and inspect steps and partners as well as the deck around them before we make such a big spend on an older boat...

I'm just gutted, I'm sure our boat is one of the most well-founded F39's still afloat, it is the boat whose masts were featured in Eric Sponberg's guide to carbon mast repair. The lynchpin when we bought her was always the original perkins with 3400 hours or so. It kills me to even think about whether repowering would be a good investment :(

Any advice would be much appreciated. 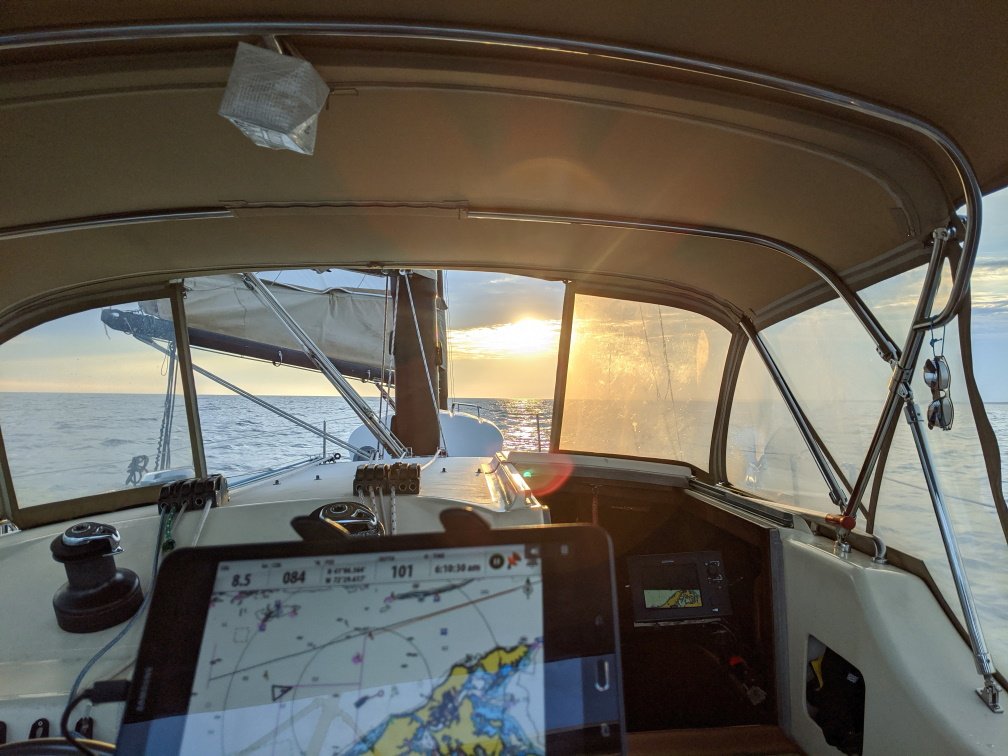 I was on Block Island from 7/20 to 7/24 anchored near the Lady L megayacht.
What makes you think its not the starter?
Belanich
Dolcetto F38
Top

I too have a Fredom 39 ( deck salon, hull number 27). I re-powered in 2014, when I was tired of mopping up oil from the engine, not able to run at rated RPM without overheating, the noise, and was on the way down the west coast to Mexico. A rebuild would have cost $11k, I was able to replace it with a beta marine 38 for about the same price after selling the old engine and alternator.
Douglas Monroe
s/v Spartan, 1983 Freedom 39 Deck Salon
La Paz, BCS, Mexico
Top

Wow, small world. We spent a nice weekend there, on a mix of private/town moorings.

I believe the starter motor is OK, solenoid engages and it does try to turn over, but just seems to get 'stuck'. I'm guessing it blew the fuse because the current draw of trying to turn a seized motor was too great.
"Shiloh"
F39PHS
Top

I too suspect the starter. Pull the starter and take it to a starter rebuild shop. They will be able to diagnose it really fast and the hundreds you may spend there could save you thousands in the end!

If it is hydrolock, you will need to know how. Two primary suspects: Either way, you gotta get the liquid out of there and sooner is better than later.
I am just guessing here since I have only experienced hydrolock on a gas engine. I just pulled the plugs on by one and hand-cranked the motor. I got a bunch of water out of the second cylinder. So on a diesel (this is the guessing part) I would pull the injectors and then gently hand crank the engine. When one of the injector holes squirts check to see if is water or fuel. If it is fuel, replace or service the injector since it probably leaks (is the crankcase vented to the intake system? because it could be engine oil too.), service your filters, bleed and go! If it is water, I would suspect the manifold and this would be out of my league!
Chad Rider
Rumford, RI
02916

I have had something similar happen on a small Yanmar, with the solenoid clicking, starter trying to turn. When I pulled & disassembled the starter I found the interior almost completely filled with grease of the ages. Cleaning everything out had it working like a champ. Here's hoping your problem is something equally fixable. We need to keep those old Perkins going!
Top

Thanks all for the replies, I'm not the most experienced with diesels but I know similar situations with gassers have ended poorly (but thats mostly from driving into a pond or the like). Gives me a bit of hope to hear that people think this could mean a bum starter. I have a mechanic who was recommended by all the locals on the bay coming by tomorrow to check it out.

The motor leaks oil like a sieve but that's to be expected from what I'm told. I had planned to do the seals over the winter because otherwise it runs cool, somewhat quiet, and has never given me any guff up until now. Hopefully some good news to share tomorrow.

One bright spot, the boat's still there after the hurricane

The good news is, the engine is running again. The bad news is the mechanic confirmed water in the cylinders and it had been sitting a few days. I plan to head down and check the exhaust elbow, and design of the exhaust where the outlet is on the port side, as well as changing and testing the oil.

The question remaining is, how? We motored for 20 hours and there were quite a few following seas, but everything on the dials was normal, and we motored into the calm harbor and shut down as usual. I would have expected a lock-up while underway if water was forcing itself in the exhaust, not after we had shut the motor down. We had not done any excessive cranking/unsuccessful starts other than the first one that immediately blew the fuse. I'm glad the mech got her running again but now I need to find out how to prevent this water intrusion in the future!
"Shiloh"
F39PHS
Top

monroe wrote: ↑
Mon Aug 03, 2020 1:42 pm
I too have a Fredom 39 ( deck salon, hull number 27). I re-powered in 2014, when I was tired of mopping up oil from the engine, not able to run at rated RPM without overheating, the noise, and was on the way down the west coast to Mexico. A rebuild would have cost $11k, I was able to replace it with a beta marine 38 for about the same price after selling the old engine and alternator.

How do you like the beta? That was top of my list in terms of potential replacements. We will do compression/blowby and oil testing once we haul for the season and if the news isn't good, we'll probably go that route. I was wondering if the 38 was enough power because I'd hate to have to go up 150-200lbs to get a 43 or a 50.
"Shiloh"
F39PHS
Top

How do you like the beta? That was top of my list in terms of potential replacements. We will do compression/blowby and oil testing once we haul for the season and if the news isn't good, we'll probably go that route. I was wondering if the 38 was enough power because I'd hate to have to go up 150-200lbs to get a 43 or a 50.

I love the beta. Reasonably quiet, clean, built in oil change pump is nice, easily pushes boat at 5.5-6.5kts at 80% rated rpm (2400). I only have 300 hours on it, because I like sailing better. My dealer gave me a beta to kubota parts cross reference guide, so in theory I can get almost any part at a tractor store anywhere in the world.
Douglas Monroe
s/v Spartan, 1983 Freedom 39 Deck Salon
La Paz, BCS, Mexico
Top
Post Reply
10 posts • Page 1 of 1