Rafa, I'm not envisioning what you did. Are these rings on the outside of the mast at the floor level? If they are inside (the "top hat", I suppose), how did you pour the resin inside? You've given me the idea about fabricating an "outer ring" that could hold spartite and provide support to prevent the mast from moving. I have an F38 with the same frustrating "creak" issue so I'm most interested in the fixes out there because I don't want to have to pull that mast ever again!
Kynntana, Freedom 38
Top

gamayun wrote:Rafa, I'm not envisioning what you did. Are these rings on the outside of the mast at the floor level? If they are inside (the "top hat", I suppose), how did you pour the resin inside? You've given me the idea about fabricating an "outer ring" that could hold spartite and provide support to prevent the mast from moving. I have an F38 with the same frustrating "creak" issue so I'm most interested in the fixes out there because I don't want to have to pull that mast ever again!

Hi... no, on the ring on top of the cabin roof, the masts are secured in place with two thick wedges of very dense rubber. This is a structural design requirement as the mast must have some give at that level. These wedges secure the mast in place, compressing it against the mast hole on the cabin roof. There was a small gap left between the lip of the ring and the wedges which I filled with a domestic rubber compound used for sealing gutters. Works a treat.

The creaking was produced by the foot on the mast, moving perhaps a millimetre or two, inside the bottom ring attached to the sole of the cabin, and scratching the cabin floor. In this case, there is a gap of about 10 mm between the mast and the inner lip of the ring. For some reason unbeknown to me, the bottom rings are slightly larger in diameter than the outside rings. It is in this gap that I poured the resin.

I had the issue when I bought my Freedom 30 about 19 years ago. Bringing the boat from City Island, NY to Buzzards Bay (downwind all the way, everyday) the banging at the mast step was very unnerving for a new owner but I located the movement right away. I pull the mast every year. The very first year I bought a dough rolling sheet for camping about a 1/16th inch thick. I cut it down to the height of the mast base, cut out holes for the the alignment bolt channel then glued and taped the sheet to the mast step. 19 years later and it is still working with the mast pulled every year and the plastic sheet remaining on the step. I just do a little tape replacement/adjustment every couple years.

There might be a bit of confusion in this thread. I think Nausikaa is an early UK-built F30 cat ketch, so the foot of the mast sits inside a ring, not on a top hat. There were two later arrangements - a top hat with a single through bolt, and a top hat plus an L-shaped bracket bolted to the mast before stepping it. See the documents <Nausikaa original rigging schedule - Freedom 30 ck.pdf> page 8 and <F28 CK info.pdf> pages 10 & 11 in the Documentation forum for details. Note that the deck collar shown in the second document is not the same as the early version - it doesn't have an upstand for a mast boot, as shown in the Nausikaa document. Also those diagrams suggest that the collar is not through-bolted to the deck, but the Nausikaa document describes the way my collar is fitted - page 2 paras 8-12

The deck and foot rings on the original system are exactly the same diameter (I took mine off to remove the corrosion, which is when I compared them). They appear to be the same casting except that the foot ring does not have an upstand. The mast foot is supposed to be held in place by two machine screws (see the Nausikaa document), but the carbon fibre really isn't up to the job, so although the machine screws stay in place, the mast moves. My mainmast creaks when rolling downwind, but the mizzen doesn't. I think that is simply because the lever above deck is longer on the main than on the mizzen, and the lever below deck the other way around. The masts are the same length, but there's much more of the mizzen below the deck.

By the way, the original design at the deck is a ring wedge, not a two-piece split wedge. Mine are two-piece, but only because a rigger at some time in the past (before I bought Feronia) managed to break them. The wedge is pressed down by the deck ring and there is a gap between the ring and the mast. A watertight seal can be had by caulking between the ring and the deck, and fitting a mast boot (but only if the deck ring is the sort that has an upstand!). I have no caulking between mast and ring, and no water gets in. The document <full manual freedom35.pdf> page 15 shows a similar arrangement on the F35 CK, but the F28/30 is through-bolted - I haven't been able to find a diagram of the F28/30 arrangement.

Essentially, the original F28/30 CK arrangement seems to rely mostly on the downward tension in the halyards to keep the mast in its step if the boat is knocked down.
Andy
Feronia
(UK Freedom 30 cat ketch, build number 107)
River Exe, Devon
Top

Thanks Andy!
Exactly... Below some picks from when I was relaying the cabin floor. Currently cabin floor ring and ceiling hole are covered, so I can't show it. All picks from mizzen, but main is the same setup. The rubber wedges can be seen (light tan colour) on the cabin ceiling. UK-build F30 CKs have a few peculiarities. This is one. The (in)famous mast top "crane" is another. Matter of geographical idiosyncrasies.... 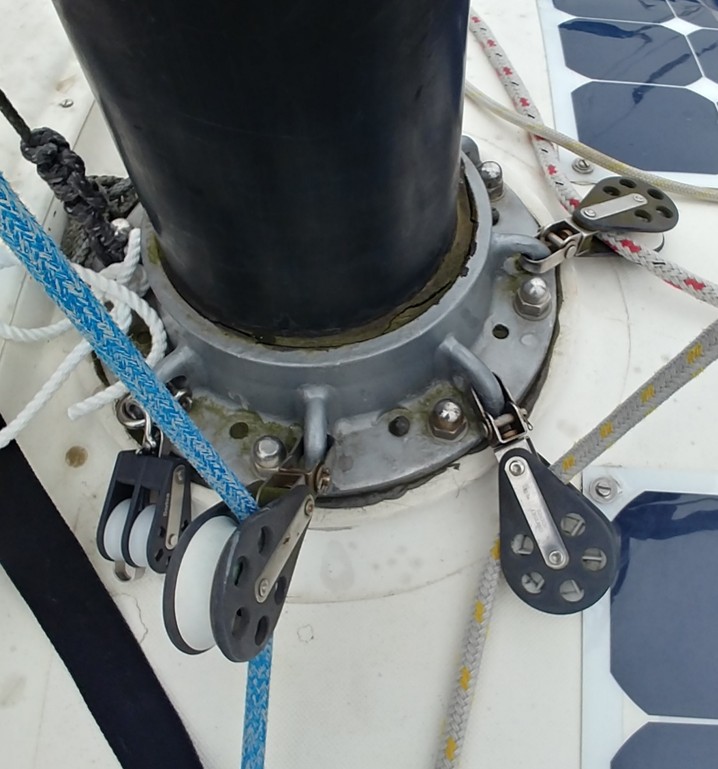 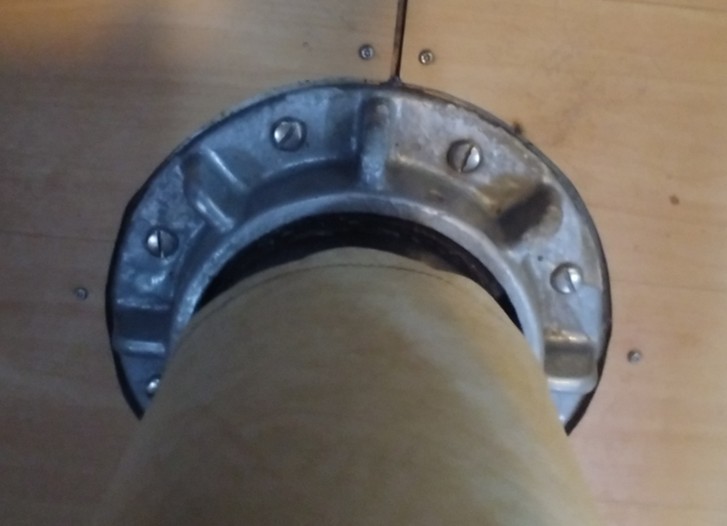 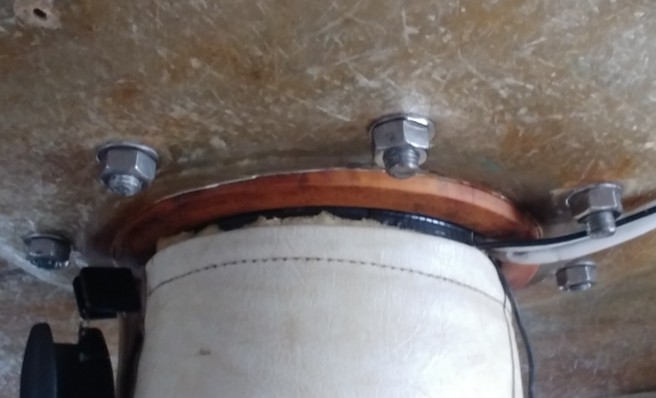 I'm close to done with this project so here's the approach I took with my Mull-28.
I had Nova Vita's mast pulled for the first time in my ownership (3 years so far) to address the movement and banging of the mast, particularly when going downwind in a seaway.
Inspecting the mast step, there was some moderate damage to upper section of one of the "ears" that I repaired with epoxy fortified with silica. Also of note was that the rubber sleeve over the alignment bolt was badly worn, almost all the way through.
With the mast step repaired I coated it up with mold release and used foam board and epoxy fairing compound to make a female mold of the mast step. I then used that with some scraps of fiberglass cloth to make a dimensionally accurate replicate of the mast step.
I will now use that to build up the interior of the mast itself using some 3" strips of chopped strand mat and epoxy. Hopefully that will give me a snug fit and eliminate the creaking/banging.
Pictures of the mold and mast step replicate attached. When I insert the mast step replicate (the "top hat") into the mast, I'm surprised at how much of a gap there is.....probably a full 1/4". No wonder it bangs around so much. 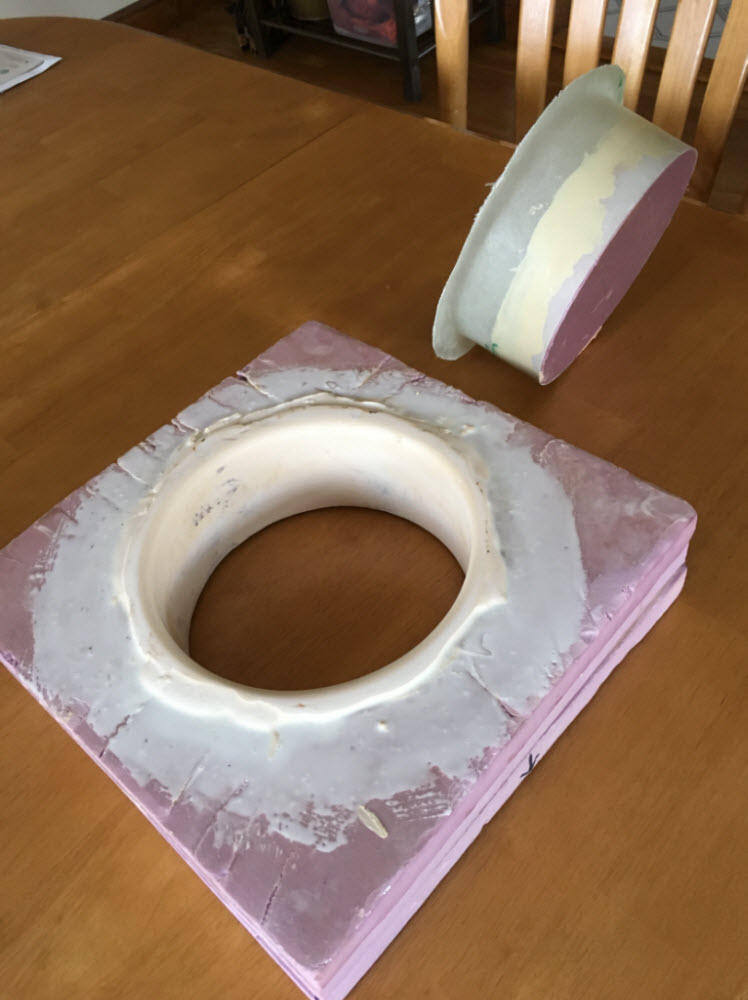