Hey Folks,
I need some experienced eyes to take a look at these photos. I am currently under contract on a 1997 Freedom 40/40 and had the mast inspected today. These are the photos. Any concerns? The mast looks a little more beat up than I expected but it looks to me like it is mostly just at the paint and fiberglass layers. Thoughts? Any concerns about the gap at the bottom of the sheave box? 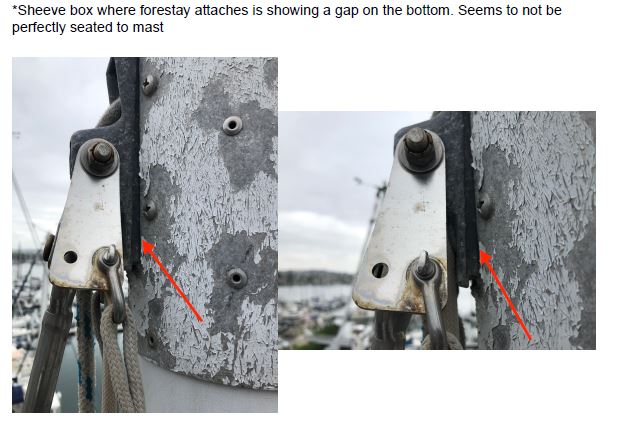 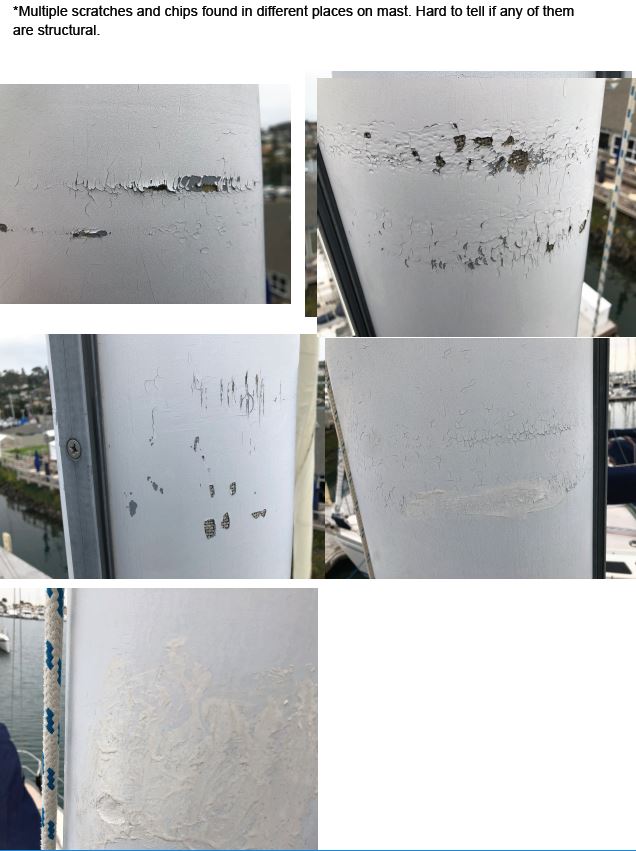 Not sure about the sheeve, but the rest of it looks cosmetic, I would recommend taking her out on a test sail with 20+ knots of wind and see what happens, I’m willing to bet nothing happens and the stick will go another 40+ years. There are more posts on this site that address mast cracking, but after owning two freedoms over the last 10 years the only time I’ve seen a mast failure is blunt force trama. The US Army started using carbon fiber on all it rotar blades back in the 90s, because it can take ballistic round penetration and give up very little of it dependability, but if the blade strikes any branch thicker than your thumb it comes apart. Shoot holes through it all day long but don’t try to make an improvised LZ in the jungle like they did back in Vietnam.
Doug and Marie
Millennnium Falcon F33 CK cb #4
1980 wish bone booms Electric Drive
Top

Tony, I'm just now noticing the flat head bolt in the mast track. Curious about that because I would think it would be really hard to tap and there's no way to get a nut on it. When I was coming back from Kauai, the rivets (3/16-inch?) in my mast track started shearing as well as popping out whole. Of course they were 30 years old and degraded. I upsized the rivets, but I could see someone sticking a screw in there as a temporary fix. These CF masts were over-built so probably OK from that standpoint, but I'd take the mast down and get these issues fixed. This would also tell you what kind of material is in the mast collar. Suggest you request they reduce sale price by $4-5k for fixing the mast.
Kynntana, Freedom 38
Top

From the documentation it looks like the mast track (harken with the battcars) was installed as a factory option. The whole mast track is screwed on with what appear to be machine screws. I assume that they are tapped into the carbon fiber. The other tracks I have seen like yours are riveted on. Not sure if other folks have the harken battcar factory option and if those were screwed on or riveted. On the plus side, the main drops like and anchor when you let the halyard go. Really nice!
Tony
SV Circe 1997 Freedom 40/40 - Hull #20 - Brickyard Cove Marina, Richmond, CA
Top

gamayun wrote:Tony, I'm just now noticing the flat head bolt in the mast track. Curious about that because I would think it would be really hard to tap and there's no way to get a nut on it.

I believe the later boats (F35, 40/40) switched from rivets to screws for affixing the mast track, and I think they're just tapped into the carbon fiber (can't say for sure, but I've seen an F35 mast with a Harken track screwed on). Based on my discussions with Paul Dennis on the subject, tapped fasteners are preferable to rivets when it comes to attaching most things to the mast. The problem is that while it taps nicely, the threads in the carbon are fairly slippery, so you don't want to just tap the hole and thread in your screw. In addition to a spring washer, Paul recommended I put a dab of 5200 on the screw threads, as that fixes it in place.

For affixing higher load items, merely tapping into the carbon fiber is not sufficient. The two examples I know of are the gooseneck and boom vang. The gooseneck on later F38's and F35's use an Isomat bracket that is through bolted with eight 1/4" stainless bolts, with nuts on the outside. To tighten them, access to the bolt heads is achieved through a small 1" or so hole in the forward end of the mast. They originally used acorn nuts for these, which was stupid. I found this out the hard way, when I noticed one sitting on my deck as we sailed up through the Bay of Fundy last summer. Turned out that only 3 of the 8 nuts were actually tight, with the rest spinning around totally loose! I was able to grab the studs for the two missing nuts with a putty knife and get a nut on them, which kept them from falling into the mast until we got into the harbor that night. The real fun began when I had to carefully pilot a socket on two extenders through that tiny hole in the front of the mast and somehow get it onto the head of the bolt so I could tighten on a proper nylock nut. It took over an hour, but we were eventually able to get 6 of the 8 nuts tightened down, and that lasted the rest of the season. I'm planning to upsize all 8 fasteners this spring, which should be easier with the mast down. So that's something to check for those of you with this style gooseneck!

For a boom vang attachment, Paul has come up with a rather elegant way to do it. First, holes for the bracket are drilled through the mast in the appropriate position. Then, a square of aluminum plate about 6" by 6" and maybe 3/8" thick, which has been bent to match the curve of the mast, is affixed with thickened epoxy to the inside of the mast underneath the holes. Once the epoxy is dried, the aluminum plate can be tapped in place, and the vang bracket bolted to it.

Regarding your jib box, I don't think that's necessarily a huge problem. Based on the picture, I believe you have the same one as I have, which is an Isomat NG1. As you can see in the picture of it below, the box is really only held in place by the notch at the bottom and the single screw at the top, which is meant to go through a hole drilled in the mast and into a captive locknut that's held inside the casting. I'd say as long as that screw is still in place, and the opening in the aluminum plate that's riveted onto the mast for the jib box isn't deformed and is still reasonably tight, that assembly isn't coming out. If you can, take it apart and inspect it, then fill the gap with silicone and forget it. Oh also, this jib box uses "drop-in" sheave axle pins for both sheaves, which is a failure waiting to happen. I recommend having a machine shop drill holes so that you can through bolt the sheave instead.