PITA - yesterday i changed out my impeller to the 3gm30f. This is only the second time I've changed it - do it about once a year. The water pump is really difficult to get to - I have to remove the water pump completely to be able to get to the impeller. Doing this while underway seems like a recipe for disaster for the time it takes (as a single hander I'd need to be heading straight out to sea to do the task). Any one have any impeller tricks to share. I read once of a water pump rotation kit where the water pump is flipped around, facing forward..... don't think I'd have space however for that..... Suggestions? 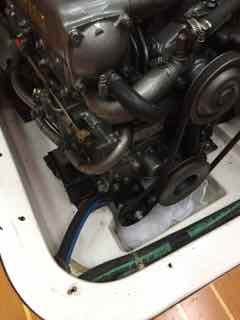 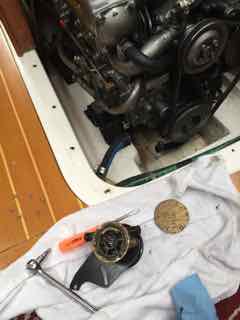 I have no suggestions for you, but curious what others say because of how long over due mine is. I think once a year is too frequent....six years is pressing my luck.
Kynntana, Freedom 38
Top

Even though my water pump faces forward and I can easily access the impeller, I installed one because I like the teflon disc that lets the pump run dry without burning up.
Josh
Sunset Spy
F38, Hull #152
Boston, MA
Top

RadioZephyr - speed seals would cut my time in half I think ( still have to remove the water pump) but I believe the company closed. Anyone know of a substitute?
Top

YOYO for removing it, but I have a good trick to re-install.