At the risk of bringing up yet another single line reefing discussion, I have searched through prior posts but have not seen anyone actually using or suggesting the arrangement that my boat came with, which is simply a bowline tied directly to each reef point. I figured it was done improperly by the previous owner until I looked back at some photos taken of the original F30 fleet at the Bitter End YC. They were rigged exactly the same way, so I assume there must have been others that started out this way. The downside of course is the lack of a downward pull to the boom, but why would Freedom have rigged it this way for a production run? Does anybody else still use this arrangement?
In order to change it, I’d need to either add padeyes to the boom, or add a grommet to the sail below each reef point to bring the reef line down around the boom. I could also go with a loose footed main, but I didn’t really want to do that yet… 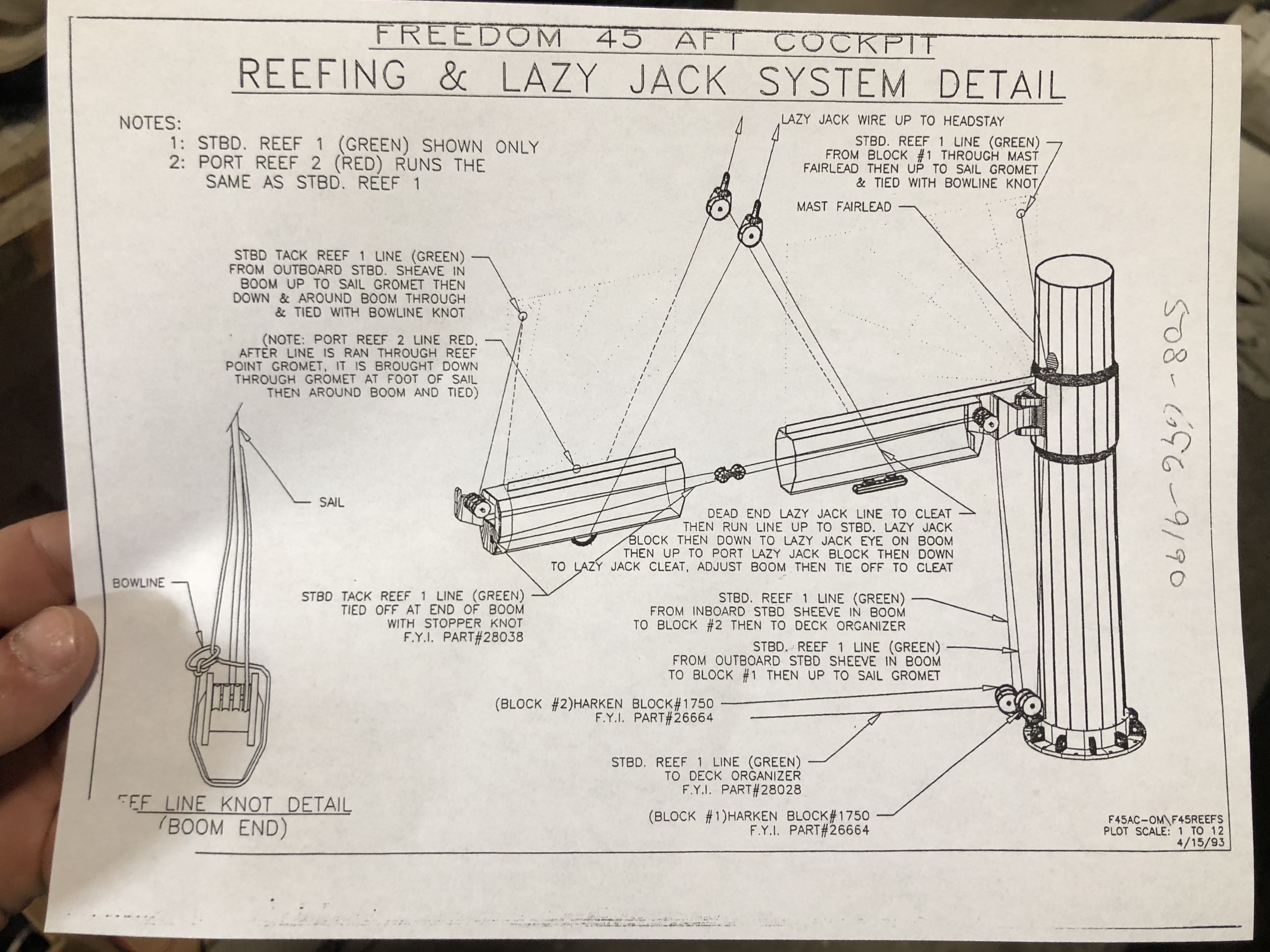 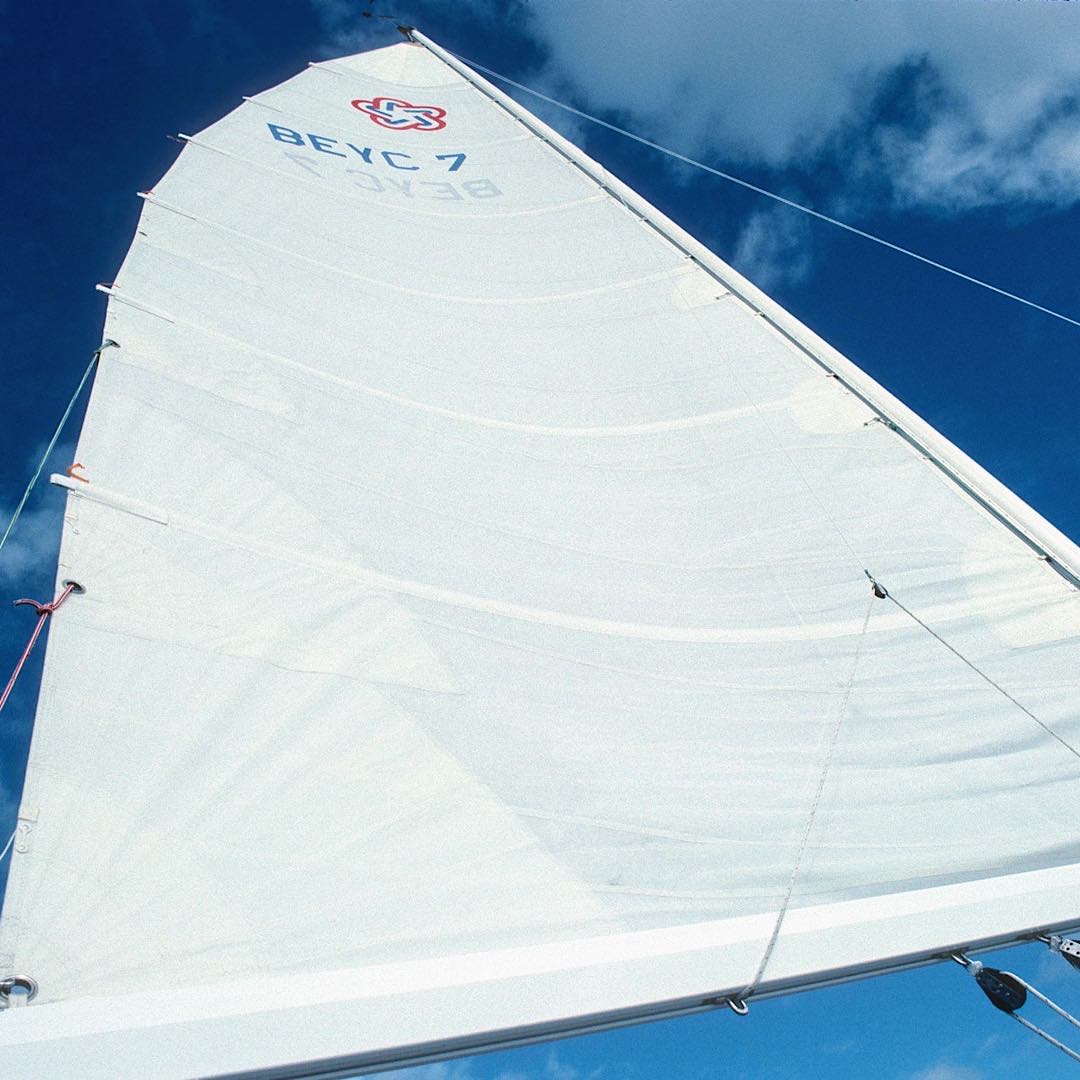 Personally, I have found that a loose-footed main performs better than the alternative. I assume that Freedom found the same thing, as that's what they show in their diagrams.

The reefing system gains a 2:1 pull-down, and one of the key things that you want to achieve is the main tight against the boom.

Thanks Geoff. Agreed on the tight fit to the boom, which is why I wondered about the original Freedom setup. I’m not sure when they started supplying loose footed mains but there must be several years worth of production prior to that. They do mention a reef related grommet added to the foot of the main in the diagram I posted. That would allow the wrap around the boom under the reef point, but neither my boat or the BEYC fleet had those fitted…only a bowline to the reef point. Maybe they figured that with the large roach cut of the main the reef points were far enough aft?

I have the same boat and have used both loose footed as well as "footed" mains (although mine just used about a 8-10 slides to hold the foot to the boom), and regardless of the main, have rigged it just as shown in the diagram. The reef line goes up and through the main reef grommet, then down around the boom and under the sail (directly under the reef grommet and between the slides), where I tie a "encircling" bowline around the reef-line (which enables the reef line to snug up around the boom when tightened). This enables the reef-line to pull the main directly down to the boom as opposed to sternward to the end of the boom.
James Orr
Orr What
1988 Freedom 32 (Mull)
Sodus Bay, NY
Top

I do exactly as James does on my 35. Conventional main, not loose footed. Seems to work.
Bob R.
1995 Freedom 35 (Pedrick)
"Liberty"
Old Saybrook, CT
Top

Yes I run mine the way James does (and the drawing shows) as well. However in the photo it looks like the the ends of the tack reef line are tied to the sail instead. One BIG change I made was to replace the 3/8" (or 5/16"?) double braid tack reef line with 1/4" Dyneema line. It is much more slippery and you can use a smaller diameter which makes the line run through the pulleys and grommet MUCH easier when taking the reef in or out. The other end of the reef line that leads to the mast and then the cockpit I left as double braid line since there needs to be a bit of stretch in the system. This is one of the best improvements I made to my boat!
Top

Thanks so much for the responses. After looking at the single line reefing solutions presented by various builders and sailmakers, it does seem clear that the best option is reef line brought down to the boom and simultaneously pulled aft by via the line from the sheave at the end of the boom. My curiosity was more why the boats were not set up that way originally. Apparently mine had never been changed, and without a loose foot (or grommet or slugs) you can’t really set it up like the drawing.
I have seen a few people suggest the dyneema for the aft line as Mark K suggests, and that makes a lot of sense since that line never needs to be winched or cleated.